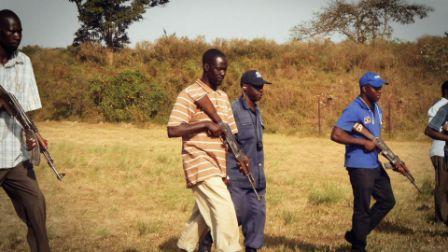 Former child soldiers from Sierra Leone and Uganda are being used as cheap labour for operations in Iraq and Afghanistan, according to a new documentary on Al Jazeera.

Child Soldiers Reloaded features interviews with several of these former child soldiers, most of whom were recruited to work for Aegis, the private military company that signed an estimated US$293 million deal with the United States (US) Department of Defense in 2004 to execute operations in Iraq and Afghanistan.

One former child soldier from Sierra Leone, Bockarie Marrah, tells how he started crying the first time he held a weapon in Camp Lion, a training camp used as part of his preparations for Iraq. “My memories came back from the past and I started weeping,” he says.

His response was common, according to Maya Christensen, a former assistant professor at The Royal Danish Defence College, who observed this training. “For many of the recruits, it’s the first time holding a weapon since the end of the civil war… Many were starting to shake, and some were even starting to cry, when they took up the weapons, not being able to handle it.”

“It’s a contradiction,” says psychologist Michael Wessels. “On the one hand, Western countries have pumped large sums of money into the reintegration of former child soldiers, but now we have governments like the US supporting these so-called security companies that recruit people and continue their exposure to violence and cement their identities as perpetrators of violence as soldiers, that makes it impossible to ever reintegrate them into civilian life.”

“It’s really crazy in Iraq,” says another former child soldier from Sierra Leone, Alhaji Koroma. “Because since the first day I stepped my feet in Iraq, every day there was a bombing… Every day we have rockets fire. Every day I have gunshots.”

In 2010, the US congress appointed a commission to investigate outsourcing to private military companies. The recruitment of former child soldiers was not part of the investigation, but the commission’s chairperson, Michael Thibault, explained the “lowest-price-technically-acceptable rush to the bottom” they discovered, where Peruvian and Columbia guards being paid between 1000-12000 dollars were soon replaced by Ugandan guards at about $800 dollars a month, and then later by Sierra Leoneans, at about $250 dollars a month.

“The original goal was not to bring soldiers or ex-soldiers from the poorest countries on earth,” says Robert Y. Pelton, author of Licensed to Kill. “But the US bidding system requires that you pick the lowest bidder, so it became the status quo in Iraq to have multiple layers of foreigners, as long as you were in the army and you meet certain criteria, and sometimes you don’t have to be in the army to meet these criteria.”

“People care a lot when a dead soldier or a dead marine shows up in this country,” says Sean McFate, a professor at Georgetown University and a former employee of a private military company. ”We start asking ourselves, ‘Why did they die? What were they fighting for?’ Nobody bothers to ask about dead contractors.”

Aegis and the US Department of Defense declined to be interviewed for the documentary.

The number of former child soldiers recruited by private military companies for war zones is unknown. The total number of employees from the developing world in these companies is also unknown.

In 2014, during the Ebola crisis in Sierra Leone, private military companies stopped recruiting troops from there. Recruitment continues in other developing countries.

Clink on link below for full documentary:

Sorghum Farmers Frown at Finance A...