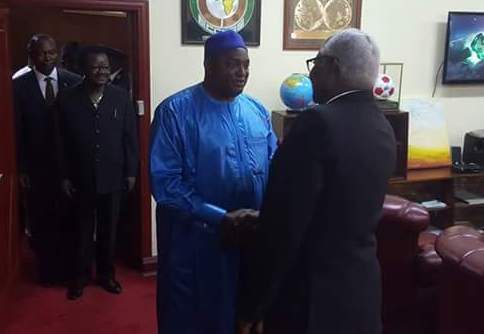 Gambian President Adama Barrow arrived in Freetown last evening for a two-day working visit from Wednesday 26 April to Thursday, 27 April, 2017. This is President Barrow’s first visit to Sierra Leone since assuming the mantle as President of the Republic of The Gambia.

President Barrow, accompanied by a delegation of senior government officials, was received by President Dr Ernest Bai Koroma at the Bintumani Hotel at Aberdeen in Freetown.

Welcoming his Gambian counterpart, President Koroma assured President Barrow that Sierra Leone was home for not only the Gambian leader but for all Gambians.

Both leaders attended a dinner at the Bintumani Hotel immediately afterwards.

It would be recalled that Sierra Leone, as part of the ECOWAS mediation effort, played a pivotal role in the political impasse that rocked The Gambia after the December vote in 2016.

This visit is part of a tour of ECOWAS countries to show appreciation to ECOWAS leaders for their role in resolving The Gambian political crisis that saw the departure of former President Yahya Jammeh. The visit is also expected to strengthen the close bilateral relations between the two countries.

President Barrow’s visit coincides with Sierra Leone’s 56th independence anniversary celebrations and he will celebrate the occasion with the country on Thursday 27 April.

Stay tuned for more on this…

Worries over Street Children in Si...