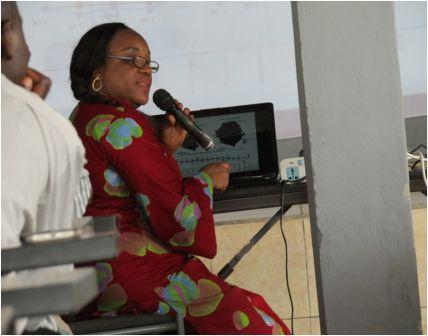 As the number of Tuberculosis  cases  increases  due to negligence of assumptive patients to  respond to free treatment administered  at the Direct Observer  treatments (DOTs) Centers  across the country, the National Leprosy and TB Control Programme of the Ministry of Health and Sanitation  in collaboration with its partners,  from 19 to 21 April, 2017 converged  at Garden State Hall in Makeni  to take stock of their achievements and challenges in 2016  with the view of putting in place a  robust  national  TB eradication strategy.  (Photo: Programme Manager TB/Leprosy Control Dr. Lynda Foray)

The Director of GLRA Cyril Johnson recalled that his organization has been a strong pillar to the Ministry of Health and Sanitation since 1996 in the fight against Tuberculosis and leprosy, pointing out that they are now at the verge of eradicating leprosy. He said with collaborative efforts of the National TB and Leprosy control programme  and partners backed by community cooperation they will eradicate TB in Sierra Leone.

Mr. Swab Kabbia field staff of World Food Programme WFP in the Northern Region of Sierra Leone said his organization has scaled up nutritional support towards TB, HIV programmes across the country.

Talking on the social aspect of the disease he said nutrition is heavily required before and after responding to treatment so as to expedite recovery.

Representative of Catholic Relief Services CRS Ibrahim Jarjou  who maintained that CRS is fighting  TB in  10 West  African countries, stated that CRS  has been in Sierra Leone since 1963 supporting emergency relief and  other national and community development initiatives especially in TB control programmes.

He said treating TB is one of the difficult ventures, stating that TB is a highly infectious disease in Africa where precautionary measures are extremely lacking , stating that  Poverty accounts for spread of this deadly disease because in most African countries we eat with one spoon; drink in one cup and sleep together.

He concluded that 60% of African population is at risk of contracting TB he there admonished all to brace up to identify the cause for possible eradication.

A Civil Society Activist on TB and Director of CISMAT  Abdulai Bakarr Sesay  who was once a victim of TB infection  gave a testament of what went  through  as TB patient in which  wrong diagnosis were made before he could finally be diagnosed with TB and rapidly responded to treatment.

He commended the current leadership of the National TB Control Programme that has initiated immediate result oriented diagnosis as compare to past years when test results are delayed.

He explained that his organization work to compliment Government’s effort by adding value to National TB Control Programme.

He explained that they have trained 140 animators in various communities and provided them with TB tools and test kits to identify cases.

He said in the next couple of months they will be engaged in   the formation of TB support groups and to start talking about TB publicly in our houses, communities and other public fora  to raise massive awareness on  the danger of the disease; preventive measures and  solution to the disease.

The programme Manager of  TB and Leprosy Dr. Lynda Foray  who projected that TB  will be brought to an end  by 2030 confirmed that TB is a public Health issue  as it kills many people in communities where diagnosis are delayed. She explained that TB treatment per patient is expensive and required huge resources to order for drugs to save lives.

She confirmed they have ordered for containers from abroad to set up modern laboratory at Lakka Facility where baseline test would be done on Multiple Drug Resistant TB.

Declaring the session opened on behalf of the Chief Medical Officer Dr. Brima Kargbo, Dr. Alhaji Turay registered appreciation to the National TB Control Programme for improving on the prevalence, adding that Ministry of Health Partners should take ownership of the programme to end the disease.

He advised that, those community mobilization structures set up during the Ebola should be used to fight TB and Leprosy. He pleaded with all stakeholders to pay serious attention co- infection TB/HIV.

TB is a treatable and curable disease if promptly diagnose and administer treatment.

A number of parameters were attributed to drop in percentage of those defaulting Districts, which ranges from: loss of follow-up, inadequate reporting tools, little sensitization and awareness raising; stigmatization and stock out of drugs among others were put into perspective to address them this year.

The occasion was climaxed with presentation of awards to deserving and dedicated personnel.