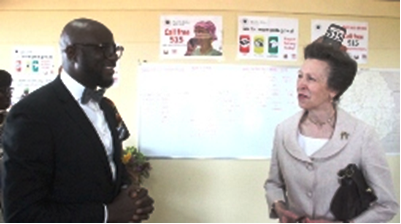 Explaining the Pay No Bribe campaign to Her Royal Highness, ACC Commissioner, Ady Macauley Esq., underscored that the fight against corruption in Sierra Leone is a demonstration of Government’s response to the scourge; as corruption was identified as a major cause for the decade-long civil conflict. He furthered, the PNB campaign is an initiative aimed at identifying the trends of bribery in key service delivery institutions with a view to making informed targeted intervention for improved service delivery. Commissioner Macauley noted the uniqueness of the PNB campaign in sierra Leone, as Government is at the centre of its implementation unlike other countries where it is implemented by civil society organizations exclusively, without Government support and involvement. The ACC boss expressed the Commission’s appreciation of the visit of Her Royal Princess and said, the campaign against bribery is on course satisfactorily. The PNB model is an envy to other anti-graft agencies in Africa, and they would want to replicate same in their countries, he averred.

Samina Bhatia, Governance Advisor DFID in her presentation to Her Royal Princess said, the UK Government  through the Department for International Development (DFID) provided Financial Aid to the Anti-Corruption Commission in the sum of 4.7 million British Pounds for the Pay No Bribe campaign for a three-year period; aimed at tackling bribery in service delivery sectors in Sierra Leone. She stated that the PNB is the citizens anonymous reporting portal that tracks the trends of bribery in the pilot MDAs with the view to instituting actions, measures, and policy decisions, that would improve and enhance service delivery.

The DFID Governance Advisor highlighted as a key action by the Sierra Leone Police (SLP), one of the pilot institutions; the dismantling of illegal checkpoints countrywide drawing from bribery reports made on the PNB platform relating to the traffic division of the Police.

Responding, Her Royal Highness Princess Anne said, she was very pleased to be at the PNB Call Centre, noting the strides made in the implementation of the Pay No Bribe campaign. She indicated that the fight against corruption is a challenge globally, but that efforts must be made to control the malaise. She asked pertinent questions on, reports made to the platform, and citizens confidence in the platform.

A demonstration of how the PNB mobile App operates, reporting through the website www.pnb.gov.sl; the various steps in reporting, and deep insight into reporting on the platform was done by the Call Centre staff. The use of the 515 PNB free line from all the mobile networks in the country was explained to Her Royal Highness Princess Anne.

The Princess Royal  was accompanied by the British High Commissioner to Sierra Leone, Guy Warrington, and other dignitaries.

Elizabeth Marsh represented Coffey International, the Firm which is providing technical support to the ACC on the implementation of the PNB project.