Electorates in Yele Endorse Hon. Dr. A B D Sesay 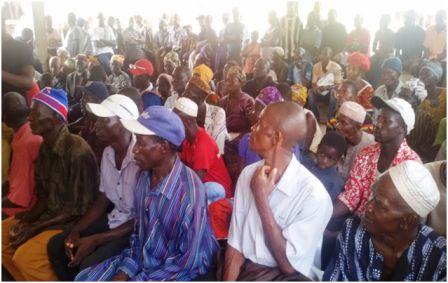 Electorates in Yele Endorse Hon. Dr. A B D Sesay

The endorsement came about as a result of the MP’s huge quantity of building materials he presented for continual of the projects in addition to the donation of school learning materials for the children.

The MP also received a round of applause for facilitating free health service delivery, support to electorates, and for facelift to the Yele police station and also for his inter- personal gesture.

Chairman of the launching ceremony, James Seisay Kanu who doubles as the constituency chairman said in his opening remarks that they as APC party are always ready to meet their promises which the MP has demonstrated.

He went on to revealed that, they at the APC party hate cheap politics because days when such politics is practice have gone but also expressed  dissatisfaction over the overdue of the implementation of the projects and attributed the cause to the Ebola Virus Disease.

Section Chief Pa. Kapr Lawyer Kamara in his welcome address expressed thanks and appreciation to the MP for the gesture and described the venture as laudable towards the development of the Chiefdom.

Suliaman Bangura AKA Osoya of Ward 218 who represented his colleague councillors said in his contribution that the gesture made by the MP is unique but also affirmed that this is not the first in their part.

He thanked His Excellency, President Dr. Ernest Bai Koroma for the MP who has followed his footsteps over the years and called on all to emulate his foot print noting that his election in the constituency was not a mistake and expressed optimism about the project implementation.

Suliaman Bangura advised his counterparts within the project implementation to handle development projects deliciously and highlighted other challenges facing his ward.

Another community stakeholder, Joseph S. Kabia  also highlighted four (4) key issues constituents in the constituency should focus on, citing participation in politics, unity in diversification, empowerment in education and the continual support to re-elect the MP.

Another stakeholder said Conteh articulated that the Chiefdom is expected to produce more ministers, promised that if he is appointed to any position of trust he will improve his community and bring smiles on the faces of his people.

Conteh further pledged his support to the project implementation by ensuring proper monitoring mechanism despite it is community owned and appeal to everyone to put hand on the wheel for the successful implementation of the projects.

The key note address was delivered by the MP Dr. ABD Sesay. He thank all and sundry for the support given to him by his constituents during his development projects assuring that him and his executive are ready to inject tangible development in the constituency.