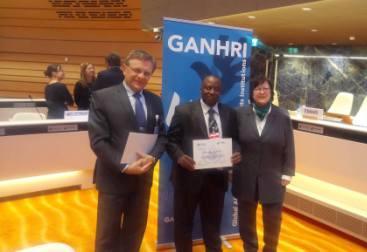 The Human Rights Commission is the only National Human Rights Institution (NHRI) in the Manor River Union and amongst the only four in West Africa with a Grade A status.

Receiving the certificate on behalf of the Commission during the Human Rights Council meeting in Geneva was Commissioner Brima A. Sheriff. In speaking to this medium on phone from Geneva, he pointed out that the accreditation meant that the HRCSL was a Paris Principle compliant National Human Rights Institution. “It also means that we are upholding our mandate and also playing a crucial role in promoting and monitoring the effective implementation of international human rights standards at the national level;  a role which is increasingly recognized by the international community”

Further expressing his appreciation for the re-accreditation, Commissioner Sheriff said “we are proud of this great achievement as the only NHRI in the Mano River Union and amongst the only four in West Africa with a Grade A status”. He used the opportunity to not only  call on government and partners to celebrate with HRCSL, but also to improve on their commitments thus stating  “the A-accreditation provides legitimacy and standing at the national level and identifies that an institution operates independently, with expertise, impartiality and accountability on the wide range of issues it addresses. It also promotes recognition and trust in NHRIs by national actors, including civil society and state authorities”.

The 1993 UN Paris Principles provide international benchmarks for the establishment and operations of effective and independent NHRIs. The ICC with support from the OHCHR reviews and accredits NHRIs on the basis of the UN Principles every five years.

Speaking further, Commissioner Sheriff informed that the accreditation of an NHRI also shows a state’s commitment to its international human rights obligations more generally, as they promote and protect all international human rights standards. “ A-status NHRIs have specific participation rights in UN processes and mechanisms: speaking rights immediately following their respective state in the Human Rights Council; they have voting rights and can hold governance positions in NHRI networks such as ENNHRI and GANHRI, although decisions are taken by consensus where possible. They have privileged access to international and national actors and they also face considerable obligations and responsibilities; report annually on the national human rights situations; are accountable on various levels; and must maintain their independence while cooperating with diverse actors”. He pointed out.

In order to fulfill these obligations, NHRIs must have adequate resources and apply objective criteria for strategic priorities within their broad mandates”. He stated.

Students’ hostels, in line with go...