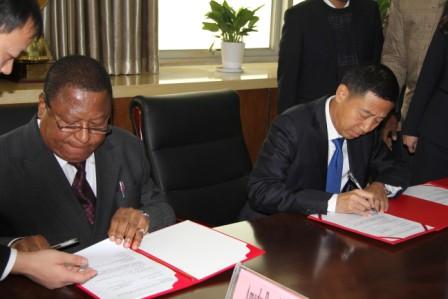 Speaking at the signing ceremony in Zhengzhou City, Henan Province, Chairman of Henan Gouji Industry Xu Mingzheng thanked the Government of Sierra Leone for it continued support to his group’s operations in the country (Sierra Leone) since 2003.

He assured of long lasting cooperation between his group and NASSIT given the commitments of both parties, referring to the MoU as a starting point in their long cooperation.

Chairman Xu called on all parties to the process to ensure the project becomes a success so as to “ensure a win-win” and expressed delight that the Embassy of Sierra Leone has been supportive.

Sierra Leone’s acting envoy to China, Kumba Alice Momoh (Mrs.) in her statement, said the MoU was a manifestation of Government’s commitment to providing an enabling learning environment for students.

She referred to students as “the foundation of a country’s growth process as they provide the platform upon which a nation could stand in the future if it should witness socio-economic development.”

Madam Momoh expressed optimism, that the signing ceremony and its subsequent implementation will help in lifting the bars of cooperation between Sierra Leone and China “given the long standing history of friendship both nations have enjoyed both at the level of diplomacy and people-to-people.”

She expressed appreciation to Henan Guoji for standing by Sierra Leone at all times, assuring them of the Embassy’s willingness to always support their operations in Sierra Leone.

Leading the delegation of six was Sierra Leone’s Labour minister, Mr. Matthew Mohamed Teambo.  In his statement, minister Teambo spoke of how globalization has today become a way forward for all countries around the world and that, what is needed for it to succeed is “cooperation and partnership.”

Minister Teambo referred to Henan Gouji’s support to Sierra Leone’s development as “a new dawn” for which, the country continues to welcome the group’s (Gouji) efforts and willingness towards partnership.

He was optimistic, that the current phase of development cooperation will be successful since NASSIT and largely Government, is willing to take further steps in that direction, referring to his presence at the signing ceremony as an indication of the political will to the process.

Speaking specifically on the significance of the hostels, Mr. Teambo referred to education as major bedrock of a nation’s development. As such, through NASSIT, government was “putting focus on developing students’ hostels in our universities and colleges to improve the efficiency of students. Without convenient accommodation for students, it is difficult for them to perform well.”

Director-General of NASSIT, Mr. Joseph Sedu Mans Jr. whilst speaking, disclosed that the MoU on the construction of students’ hostels will be the first project that his institution will be undertaking with Gouji, though he was certain, it won’t be the last project.

He was hopeful, the continued partnership with Gouji will promote President Koroma’s development trajectory, the Agenda for Prosperity.

Though NASSIT administers pensions, Mr. Mans said, social security floors, the world over, are also now engaged in what he referred to “impact investments”, saying “we accumulate funds that do not need to be dispensed immediately; we have the opportunity to invest in long term projects.”

The hostels for the students, when constructed, he said, will be vital in ensuring an enabling environment for education.

Sierra Leone, Mr. Mans Jr. stated, has had a bright history when it comes to education, having the first University in the sub region. “However the infrastructure of our universities went down. There is a felt need for the rehabilitation of these universities and colleges, and one very key area is accommodation.”

ACC Partners with EDSA on the Pay...