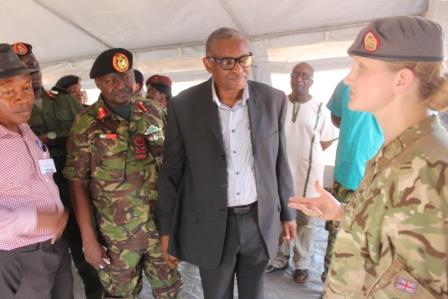 As part of the post Ebola transition plan, the United Kingdom equipped the 34 Military Hospital with a Rapidly Deployable Isolation and Treatment Facility (RDITF) at the Peace Mission Training Center, Hastings, Freetown. The primary role of this facility is to create an Ebola facing isolation and treatment facility as part of the Resilient Zero capability for Sierra Leone. The facility can respond to wider infectious disease outbreaks as required in accordance with the World Health Organisation (WHO) clinical guidelines. The annual training and validation of 34 Military Hospital on the mounting and operation, the RDITF is a key element of ensuring that the capability can deploy in support of the Ministry of Health and Sanitation. Throughout this deployment exercise, the personnel from the 34 Military Hospital were trained, assessed and prepared to respond rapidly to an identified emergency.

With the RSLAF inception as a key stakeholder in the fight against Ebola, the Deputy Minister of Defence, Honourable Captain (Retired) Abdul Rahman Kamara, the Chief of Defence Staff Lieutenant General John Edson Milton, top military officers and officials of the Ministry of Health and Sanitation paid a visit on Tuesday 21st February 2017at the Peace Mission Training Center, Hastings, Freetown where the training is hosted. The visit provided the Deputy Minister of Defence and team the opportunity to develop and consolidate their understanding of the complexities that were involved in the coordination, deployment, construction and staffing of the facility.

According to Major Darrelle Marston of the British 2nd Medical Brigade Short Term Training Team, the visit was designed mainly to provide a rare opportunity for all those involved in the Ebola Virus Disease (EVD) response environment to visit the facility. She briefed the team as they walk through the various stages in the facility in order for them to have the opportunity to see the staff in role as they support the delivery of health security within Sierra Leone. The RSLAF Engineering Regiments was also applauded in their role of erecting the tents within the facility where the exercise took place. Major Marston added that the two weeks exercise was able to train 120 medical staff, and further expressed great satisfaction over their standards. She furthered that the aim of the RDITF deployment exercise was to ensure that the RSLAF is able to deliverlogistics and clinical support in order to ensure the capability is fully functional.

Dr Alie Wurie who represented the Chief Medical Officer commended the RSLAF for its quick response to timings during health emergencies. He confirmed to the DeputyMinister of Defence that Ebola has been totally eliminated, but there are still risk factors that can occur and, thereforeencouraged all that we should not be complacent.