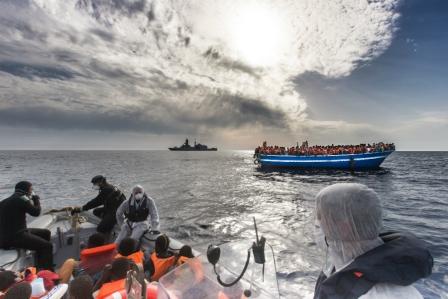 Every week, in the Brong Ahafo Region — one of Ghana’s major food baskets — vehicles load up with men between 18 and 40 years old. Many, mostly the younger men, hope to reach Europe, while others head for more prosperous countries in Africa. Irrespective of their final destination, they have common aspirations: hopes of good jobs and better lives for themselves and the families they leave behind.  (Photo: Migrants from Africa and elsewhere rescued from a smuggler’s boat by an Italian naval ship in the Mediterranean. Photo credit: UNHCR/A. D’Amato)

Kofi Twum made that trip years ago. He was only 18 and had lost his father at an early age. His mother, a subsistence farmer, became the sole breadwinner of the family. When Twum completed junior secondary school, he hawked yams to help his mother. But their living conditions worsened and Twum, fifth among six children, felt the need to work elsewhere.

“I wanted to go to Italy to be able to support my mother,” Twum told Africa Renewal from his home in the town of Nkoranza in northern Ghana.

In 2014, with financial support from his brother, Twum joined a group of 35 young men on a journey through the Sahara Desert to Libya, where they were to take a boat to Europe.

However, hopping a crowded boat out of Libya on his third attempt to cross the Mediterranean, he was arrested and deported to Ghana. He arrived empty-handed. Twum, now a street preacher in his 30s, tells Africa Renewal that he still hopes to make it to Europe one day, this time by some other route.

Most Ghanaian migrants trying to reach Europe via Libya go through Burkina Faso to Agadez, Niger. From there they join others from West Africa and other areas who are fleeing conflict and persecution.

With the services of middlemen, they travel on overloaded trucks in convoys and part of the way on foot through the Sahara Desert to the Borkou region near the Libyan border. It’s a death-defying experience. Many die from exhaustion and dehydration.

Twum recalls the human traffickers and their extortionate demands for money. Also unforgettable was the sight of many lifeless bodies abandoned in the hot Saharan Desert. “Some were leaning on the rocks, they looked like they were sleeping, others were buried in the dust,” he recalled.

Three of his fellow travellers died. “They couldn’t continue the walk. When that happens, we try to encourage them, but after a while you have to leave them, because if you’re left behind you’ll lose your way, and you’ll soon die,” he said. “These were people I knew, we travelled together from Nkoronza. I called their families later from Tripoli to inform them.”

Twum’s story is all too common in the Brong Ahafo Region, with echoes across Ghana and other sub-Saharan African countries.

During the 2011 Libyan crisis and the overthrow of Muammar Gaddafi, more than 18,000 Ghanaian migrants in Libya were evacuated, according to the International Organization for Migration (IOM) office in Ghana. The actual number of returnees, however, could be higher as some migrants managed to get out of Libya on their own before the crisis worsened.

The majority of the returnees were sent back to the Brong Ahafo Region, from which they came, according to the IOM, which supported the Ghanaian government in evacuating its stranded nationals.

For many families in Brong Ahafo, having a relative in Europe confers prestige and the prospect of remittances. “Every household hopes to have someone in Europe,” says Walter Kwao-Anati, the director of migration at Ghana’s Ministry of the Interior.

In some cases, he adds, “There is community support for relatives to leave, because your family will be looked down upon if no one has left for Europe.”

And there is also the expectation of financial support to the family back home, which helps to improve the family’s living conditions. According to the African Development Bank’s African Economic Outlook 2015 report, remittances, at $64 billion in 2015, remain the most stable and important single source of external finance to Africa.

But beneath the veil of perceived prestige are bigger national development issues. Kwao-Anati admits that in the case of Ghana, “Poverty is one of the major reasons why people migrate in search of economic opportunities.”

Oil fails to save the day

Migration is not a new phenomenon in Africa. Around the 1970s and 1980s, most Ghanaian migrants moved to neighbouring countries like Nigeria and Côte d’Ivoire. In recent years, however, irregular migration—traveling without documentation and through unapproved routes—from sub-Saharan Africa towards Europe has substantially increased.

Walker Kwao-Anati says, “As the economic situation on the continent becomes difficult, many young migrants started taking the deadly journey to Europe.”

Ghana, the world’s second-largest cocoa producer (behind Côte d’Ivoire), is also endowed with many natural resources—precious metals like gold and silver as well as diamonds, bauxite, cocoa, timber and crude oil.

When the country started crude oil production in commercial quantities in 2011, many were hopeful of better lives. That year the country’s economy grew at a record high of 15%, the fastest rate in the world, according to the IMF.

At the end of 2012, declining productivity at one of the country’s largest oil projects, the Jubilee oil field, led to a decline in revenues for the government, which had budgeted for oil revenue of more than $650 million. The corresponding shortfall was more than $410 million.

Soon after, the country faced a huge public-sector wage bill—following the implementation of a new salary scheme—and ballooning debt, leading to the twin problems of a huge budget deficit and double-digit inflation. The situation was worsened by the collapse of oil prices, which cut a hole in expected revenue.

By 2015 a surge in migration from Ghana made the country the eleventh most common nationality among migrants who arrived in Europe by boat, according to the IOM. Arrivals in Italy alone the same year totaled 4,431. As of July of this year, 2,700 such arrivals have been recorded.

Ghana, once touted as an African success story, has now turned to the IMF for support. Today the country’s ballooning debt, coupled with high interest payments, remains a source of concern.

Ghana’s vast resources have not translated into better lives for a majority of the people. Kofi Obeng has been among that majority. He comes from the Eastern Region—an area endowed with diamonds, gold and other mineral resources that Ghana exports.

As a young man, Obeng says, he did all kinds of jobs, even going through mine dumps on illegal mining sites hoping to find missed ore.

But by age 12, he dropped out of school when his grandmother could no longer afford his school fees. Soon he and his friends were heading for Bolgatanga in northern Ghana, where they joined 45 others aiming to reach Europe. He made it only to Libya. But during his three years’ stay in that country, Obeng says he managed to send an average of $500 to his family every other month. He returned home during the Libyan crisis.

Today, at 33 years old, Obeng is a shop assistant in a mall in the Ghanaian capital, Accra, earning 400 cedis ($100) a month. With younger brothers and sisters to support, he says, he does not make enough to go around. He is looking for another opportunity to leave Ghana. For people like him, he says, the only hope of making it in life is to go outside the country.

In a joint interview with Africa Renewal, Kazumi Nakamura and Kojo Wilmot of the IOM office in Ghana blamed the surge in youth migration on an inadequate educational system, among other factors.

“There is a mismatch between the educational system and the job market, leaving a huge skills gap,” notes Nakamura, who manages the Ghana Integrated Migration Management Approach (GIMMA) project, a three-year initiative intended to contribute to the government’s efforts to develop a holistic approach to effective management of migration.

Wilmot says that while conflicts and changes in the weather pattern in northern Ghana are influencing internal migration, unemployment among the youth is largely responsible for external migration. “Many are coming out of school with no jobs,” he says.

According to the United Nations, youth unemployment is a major driver of voluntary migration, as well as a threat to peace and security in the region. Without decent jobs and meaningful employment, African youths remain highly vulnerable to exploitation.

In April of this year, Ghana launched its first National Migration Policy, which provides a comprehensive framework for managing all aspects of the country’s internal, intra-regional and international migration flows. The director of migration, Kwao-Anati, says new policies will enable the government to engage communities more effectively and to gather data to deal with the country’s growing migration challenges.

The IOM’s Nakamura says, “There is a lot more to be done,” and stresses the need for governments to do more to link development programmes to employment and job creation.