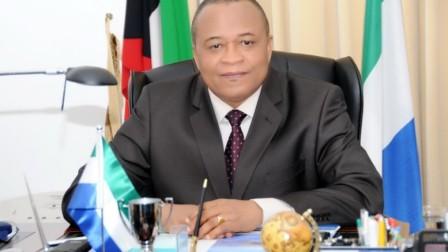 Since the dawn of human history, death, although inevitable, has always been the most painful happening that fellow humans find so hard to endure when they lose a dear member of their family or community. True, the impact that death causes varies from one to another depending on a number of factors ranging from status, caliber, position, contribution, sacrifice, benevolence, and patriotism, to mention a few.

People characterized in the higher degree of human endeavours and sacrifices are usually difficult to forget when they depart from this world because of the legacies they leave behind for others to remember and emulate.

The sudden demise of Ambassador Ibrahim Bakarr Kamara (Commonly known as Orsoya), His Excellency, President Dr. Ernest Bai Koroma’s envoy to the State of Kuwait until 8th February, 2017, is one that can deservedly be characterized as a colossal loss not only for his family, relatives, friends, colleagues and staff, but also for the entire nation.

With the departure of Ambassador Kamara, Sierra Leone has lost one of the finest envoys who effectively, efficiently and gainfully represented President Koroma and worked laboriously for the total interest of Sierra Leone. It is worthy to note that Ambassador Ibrahim Kamara was the first resident Sierra Leone envoy appointed to Kuwait in 2009. As an Ambassador Extraordinary and Plenipotentiary, he made it his top priority to strengthen Sierra Leone’s diplomatic and bilateral relations with the State of Kuwait. Since his appointment to that small but oil rich Gulf State, Sierra Leone has enormously benefited from his relentless and genuine efforts, and will continue to benefit in the long run.

One of the areas Ambassador Kamara would be remembered for was his efforts to play his own part in the improvement of the Sierra Leone economy. To do so, he wooed a good number of Kuwaiti investors to invest in Sierra Leone thereby giving employment opportunities to the youth. He was one of the envoys who was tenacious in his pursuit of President Koroma’s Agenda for Prosperity in the Gulf States of Kuwait – Jordan and Oman where he also served as Sierra Leone’s non–resident envoy. At the time the Ebola scourge was ravaging the nation, Ambassador Kamara mobilized huge resources in Kuwait in order to combat the virus which was killing Sierra Leoneans at an alarming degree. He and his diplomatic staff also donated a month’s salary to save the lives of their compatriots.

Sierra Leone maids’ saga in Kuwait was another opportunity for Ambassador Ibrahim Kamara to prove his patriotism and manifest his diplomatic prowess. He stood as a towering figure to ensure that the sufferings and maltreatment of Sierra Leone maids was brought to a peaceful end while maintaining and protecting the cordial diplomatic relations with Kuwait without any hitches. It takes a high diplomatic skill to resolve such complex issues in which some citizens of the host country were allegedly involved in gross malpractices against Sierra Leone maids. However, despite the complexity of the situation, Ambassador Kamara and his able staff made sure that some of their compatriots had their dues and were safely repatriated to their home country thereby bringing the maids’ saga to a peaceful conclusion. Ambassador Kamara also had a very good working relationship with his colleague Sierra Leone Ambassadors in the Gulf States. He and Ambassador Siray Alpha Timbo of the UAE and Ambassador Alhaji M.S. Kargbo of Saudi Arabia are always on the phone talking about issues aimed at the socio-economic development of their country. Through the relentless efforts of these three top Sierra Leone diplomats in the region, Sierra Leone has become a destination for potential Arab investors. Although they were representing Sierra Leone in different countries, they have been working as a team in the pursuance of Sierra Leone’s economic diplomacy.

Because of the care and true concern Ambassador Kamara had for his compatriots in Kuwait and the other Gulf States to which he was accredited to, he was loved and trusted by all. They have all been grateful to him and he will surely be missed by all of them for his excellent leadership qualities, camaraderie, and help in times of need. The president of the Sierra Leone Union in Kuwait has oftentimes highlighted to me the unique qualities of Ambassador Kamara who they hold in high esteem for his continued support to the Union.

My personal relationship with Ambassador Kamara has been one of the best so far. As an accredited Information Attaché to the Sierra Leone Mission in the State of Kuwait, I had a wonderful working relationship with Ambassador Kamara. It was indeed a pleasure for me to serve a Mission headed by such a high seasoned politician who had the interest of Sierra Leone at heart and who, with tenacity and forbearance, would leave no stone unturned in his pursuit of the well-being of his compatriots.

Moreover, in him I found one of the most loyal envoy to President Koroma and an all-time dedicated diplomat to the cause of his appointment. On several occasions, Ambassador Kamara would express his love for my humble self and his deep appreciation for my ‘dedication and performance” which he would often describe as ‘nationalistic and outstanding’ – accolades I would live to forever cherish whenever I recall the moments I spent with His Excellency. To me, he was not just an envoy; rather, he was a mentor, elder brother and a dear friend whom I will painfully miss for long.

No matter how I may try to enumerate the human and leadership qualities of late Ambassador Kamara, I would definitely fall short of depicting him for what he truly was and for what values he stood. And it is agonizing for me to realize that Ambassador Kamara has vacated his position before achieving the lofty national aims he had in his bosom for Sierra Leone, which he was determined to achieve during his tenure. His, for sure, is a glaring example of human frailty which buttresses the Holy Quranic verse that says: “A soul knows not what it may do tomorrow, and knows not where it dies”.

I beseech the Almighty Allah to condone Ambassador Kamara’s sins, have His infinite mercy on his soul, and make Paradise his permanent abode. May Allah protect his family from all evils, guide them to the right path, continue to provide their livelihood, and enable them realize the dreams and aspirations their late father and husband had for them.

Ambassador Kamara, may your soul rest in blissful peace.