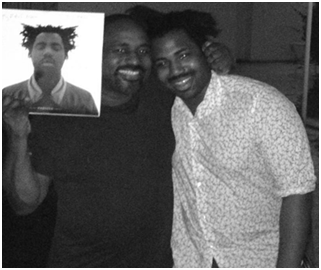 Sampha Sisay, a British/Sierra Leonean musician who sang alongside Kanye West, Beyoncé, Drake, Solange, and Frank Ocean has launched his debut album titled; ‘Process’. Sampha is the junior brother of John Bonoh Sisay, former Chief Executive Officer of Sierra Rutile Limited and the All Peoples Congress APC party 2018 flagbearer front runner.  Sampha Sisay has made his name as the sharpest songwriter in the music industry in both Europe and US over the years and made touching tribute to his late mother, Binty Sisay, who hailed from Kamagbewu in Tonko Limba Chiefdom, Kambia District with the song titled; ‘No One Knows Me – Like The Piano’ which according to ‘Hiphopdx’. He stated that he captured the grief he was feeling as he metaphorically described his mother’s old piano as a vessel to communicate his pain through.  (Photo: John Bonoh Sisay & Sampha Sisay)

According to the New York Times, Sampha cared for his late mum during her illness and after he was called home from studio in 2014 to the London suburb of Morden to care for his ailing mother who had cancer. He recalled, “the only time I will go and make music was when she was in the hospital for the day. As a caregiver, you can become a little bit dumb because you have to be very functional.”

He stated that but song writing, which he tends to do improvisational at the piano adding, “helped to sort of realize the seriousness of things and helped me reconnect and empathize with my mum.”

Sampha is the mastermind behind the sounds and lyrics of some of pop’s most well-known hits, including Beyoncé ‘Mine’, Kanye West’s ‘Saint Pablo’ Solange’s ‘Don’t Touch My Hair’ and Drake’s ‘Too Much’.

The 28-year-old who has a Sierra Leonean heritage in Kambia and Bombali Districts has carved a comfortable niche for himself among the musical elite.

“So it’s peculiar, then, given his ability to touch souls with his voice, which Sampha long shied away from singing. As a child, he was known at home mainly as a dancer, doing Michael Jackson moves at the urging of his four much older brothers. When a career in music dawned on him, he thought of becoming a producer like Pharrell or Timbaland,” New York Times reported.

Sampha Sisay disclosed that when he started, he was just making lots of beats, and wasn’t even intending to sing over them which he described in a low murmur, trailing off more often than he finished sentences. Adding, “I didn’t even have a microphone at home; I would have to go to someone else’s house to record.”

Sampha’s elder brother, John Bonoh Sisay, who is contesting to lead the All People’s Congress (APC) party and subsequently for the Presidency in 2018 said, “these are the moments that life makes complete sense. I am inspired by his devotion and simplicity. I am so very proud of him.” The London-based singer has built undeniable success writing music, but is now ready to go solo and after months of promotional tour has decided to release his long-awaited debut album ‘Process’ which contains 10 tracks with his previous singles “Timmy Prayer,” “Blood On Me,” and “No One Knows Me.”

However, Sierra Leoneans should not expect the usual Nigerian club beats but as described by New York Times, a voice “with the ability to touch souls.”