Homepages
Your trusted place for Sierra Leone and global news
Trending News
HomeFeaturedLawyer Kalokoh warns of the dangers of ambivalence, apathy and complacency in Sierra Leone

Lawyer Kalokoh warns of the dangers of ambivalence, apathy and complacency in Sierra Leone 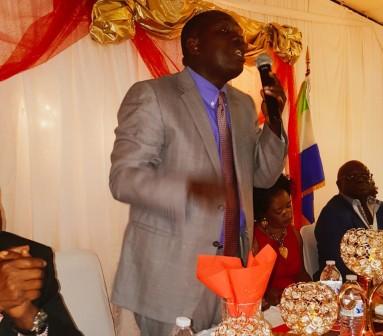 Lawyer Kalokoh warns of the dangers of ambivalence, apathy and complacency in Sierra Leone

Dallas, Texas, USA: October 23, 2016: The leader of the Kalokoh Movement, Lawyer Abu Bakarr Kalokoh, has reechoed concern that there has been a suppression of passion, friendly civility, and inability to make a better choice in our nation.  The lawyer spoke these words while declaring his intention to run for presidency on the nation’s 2018 general elections. He was addressing people in a well diverse community at Pastor Simpson’s church in Dallas on October 22.

We as Sierra Leoneans in one country, no matter which part of the country you come from, which tribe you belong to or which political party you affiliated with, we all have the duty and obligation to turn our country into paradise.  By exploring that, we have to develop a sense of national loyalty, love, and belief about our country’s superiority to realize our cohesive dreams.  It is only when we put our country ahead of self that we will experience the pursuit form of patriotism, Lawyer Kalokoh asserted.

Mr. Abu Bakarr Kalookoh is aspiring to run for presidency under the All People’s Congress APC party for the 2018 presidential and Parliamentary elections.  He was invited by his cousin, Mr. Abu Bakar Kamara popularly known as APC Gbendeh to Dallas to speak about integration of indifferences in our socio-political and cultural activities.

Standing together in joy and sorrow is a big challenge that every Sierra Leonean should adhere to and try to refrain from being negative against our leaders.  We should always try to create and maintain positive attitudes among ourselves and our leaders to bring about a change that we desire and yearn for, Mr. Kalokoh said.

Do not pray for your president to fail because you do not like him or for some other reasons. Remember that if the president fails, our nation must fails also. We must therefore help the president and all stewards of our nation to succeed. Together we can build a stronger and more perfect union, glazed with prosperity and genuine sense of pride, he said.

As a proud member of the APC, the surest path to a free, genuinely independent and prosperous Sierra Leonean,  I speak as a Sierra Leonean not as an APC party member to invoke and provoke the hidden sense of nationalism embedded in each of you, Lawyer Kalokoh went on.

“In more recent times, I have read a flurry of opinions regarding President Koroma’s tough, yet mundane, pragmatic, and reasonable economic measures aimed at starving off a recession. God knows we don’t need a recession at this time” he added.

Lawyer Kalokoh noted that, he had read statements released by his brothers, Dr. Yumkellah, Rtd. Brigadier Julius Maada Bio, Dr. Julius Spencer and a host of other fine , but he believe that their statements has just taken him aback by the common thread utilized to weave all their opinions. He applauded them for their fortitude and willingness to come forward to jumpstart a much needed national discourse but, “All I saw was a series of comparisons tending the ferret out who bears most responsibility for our country’s current state of affairs”.  I did not hear solutions, he said.

Mr. Kalokoh commended President Koroma for his unwavering determination, as he put it, “to prescribe a very bitter pill that is poised to cure our economic paralysis”.  Even though his prescription is seemingly devoid of political expediency, he said.

Procrastination is not an option, he warned Diasporas, for we are hanging on a precipice, gripped by what the Reverend Martin Luther King once described as “The fierce urgency of now”.  We must act now for we have an obligation to steer Sierra Leone off the cliff and forge our path thorough a valley of hope and selflessness, the aspirant added.

The Kalokoh movement has a firm belief that the time has ripe for all citizens to contribute thoughtful, positive, genuine, and nationalistic remedies as we engage in this important national discourse regarding the true path to economic and political independency.

In his welcome speech earlier, the president of the APC-Dallas, Mr. Sheik Daboh embraces the aspirant as a comrade of the APC party.  He reminded members of APC that they must work in close conformity with the party principles and guidelines. In the APC party, he said, we are all comrades and must be in solidarity with one another. We must honor and respect all our aspirants knocking at our doors to communicate their vision to lead our beloved republic of Sierra Leone, Sheik Daboh said.

The occasion ended with an entertainment featuring Gorboi and Texas Paddle masquerade. The Texas Paddle showcases its masquerade of elegant and fantastic costume given a reflection on the attendees about the historic Eastern Paddle. The Gorboi in its mundane costumes, many Americans saw it as an exotic dancer, prompted Lawyer Kalokoh to dance the tipical Mende melody.

The Masters of Ceremony are Dr. Foday Christian Sesay and Ms. Zainab Sesay of Z-International. Mr. Patrick Dangawalli, the President of Sierra Stars introduces the aspirant. Other community leaders attended the Kalokoh Movement party were the President of the Association of Sierra Leonean Organization in Texas ASLOT, Mr. Reuben Ndomahina and Ms. Mammie Bockarie of Tegloma.

The community is looking forward to seeing another aspirant.