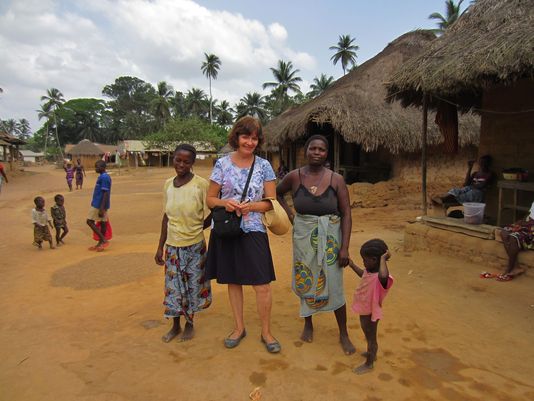 Foundation Help Sierra Leone, a local NGO operating in the country added a feather to its numerous achievements in Sierra Leone when it commissioned a six class room modern school building named ‘Spring Water Academy primary school’ in Mabron village, miles away from Four Mile in the Western Rural District.

The attempt of this NGO to construct this school in one of the most remote areas in that part of the Western Rural District could not be unconnected with its determination to complement government in its efforts to rebrand and bring education closer to the people of Sierra Leone.

Some indigenes of the village described the venture as timely considering the fact that construction work commences during the period of the Ebola epidemic in this country, days when the movement of people were restricted. The NGO spent four hundred and forty three Million Le.443M to construct the school and toilet facility. It is also worth noting that the Western Rural District was one of the prone Ebola affected communities that left lots of Ebola orphans.

The Chairman for the program, Councilor Saidu Kargbo of ward 344 in constituency 94 disclosed in his welcoming address that the construction of the school in the community came as a surprise noting that, the absent of a school in the Mabron community is recognized to have being the root cause of the high number of teenage pregnancies the community has recorded over the years.

The councilor also recalled that, this was due to the distance from the village to Newton community where the school is located and lauded the founder of the school and partners for the laudable feat but also reminded the NGO and the delegation from Holland shipyard that when the school is expanded to the status of a secondary school the burden on parents and guardians would ease.

The Councilor described the school as distinct from other schools in the Western Rural District and first in the history of the community.

The Chief Executive Director of Foundation Help Sierra Leone, Simon Seisay recalled when he visited the community two years back and asked the people what they require. He said the people requested for a school because Newton where the school is located is seven and half miles away from their community.

The FH S/L Executive Director also highlights the constraints faced by the NGO to register the school in the Ministry of Education Science and Technology but assured the community that all modalities have being put in place for the full operation of the school adding that, the school has a board comprising of four (4) members from the NGO and four (4) from the community.

Seisay admonished the community to embrace the teachers and board members to ensure that the school forges ahead.

Holland Shipyard CEO, Cornelius Paul expressed satisfaction that the people are happy about the development and stated. ‘’we are here in your community to do something good’’ pointing out that Holland Shipyard had also commissioned a new school in Pujehun town southern region.

Apart from the money spent to construct the school the NGO and partners also recruited teachers and provided learning materials such as chairs and desks worth millions of Leones.

The headman of the village Bai Kamara commended the NGO and partners stressing that he is now the happiest man in his community but warned those who politicize development to put politics at bay asserting that, education is key in development.

Apart from the clinic in Lungi, this NGO is also reported to have constructed water wells in the Wilberforce community and Waterloo where it constructed public toilets at the 55 lorry park and the market community. This shows how some Non-governmental organizations have the country at heart and can do more if given the opportunity.

Notwithstanding these numerous developments, the NGO was reported to have taken active part during the peak of the outbreak when it made significant donations to communities affected by the virus. The NGO also facilitates support to Ebola orphans in three communities in the western rural district through skills training.

The opening of the school was graced by religious leaders, stakeholders in Western Rural District including councilors in the constituency.

This is not the first time this NGO is embarking on development in this country. In Lungi, Foundation Help Sierra Leone has constructed a modern health clinic all in an effort to provide health care delivery service for the people in the Port Loko district.

Lifting the Sunday "No Tradin...