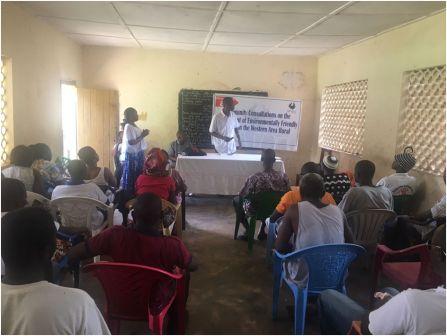 The Program Manager of the Women’s Network for Environmental Sustainability (WoNES), Mrs. Nabeela Tunis on 17th September 2016 disclosed that the organisation in August this year started community consultations in the Western Area Rural District to develop environmental by-laws.   (Photo: Stakeholders in one of the sensitization meetings)

She revealed that with funds provided by Christian Aid Sierra Leone, series of consultations were planned for various communities adding that 8 of these consultations have been held in Matainkay, Grafton, Lumpa, Benguema, Hastings, York, Kent and Newton.

Mrs. Nabeela Tunis also informed that feedback from community stakeholders was very informative and encouraging adding that participants outlined the environmental problems in their respective areas and suggested regulatory measures to minimise the level of environmental degradation intimating that upon conclusion of the consultations, these suggestions would later be forwarded to the Local Council for translation into by-laws.

The Program Manager further informed that the suggestions and contributions from the wide range of participants which included fines and penalties for defaulters, would be compiled and used to draft the environmental by-laws to be implemented by the Council.

WoNES usually works through structures and as per norm for this project; they approached the Local Council and got their endorsement before proceeding with meetings. Elaborating further, she noted that the project and approach adopted, further strengthened community ownership as it provided the space for the community stakeholders to articulate their issues as well as suggest solutions.

She believes that sustaining this level of interaction with local stakeholders would certainly help to stimulate a culture of responsibility towards the proper management of natural resources.

According to Mrs. Iyesha Kamara, Adviser WoNES, when the community participates in the formulation of the by-laws and fines to be imposed on defaulters, the people would take ownership of the process.

She further revealed that the organisation has also formed School Nature Clubs to “catch them young” on environmental issues and that the synergy between WoNES and stakeholders is promising.

Mrs. Iyesha Kamara went on to assure that WoNES would continue to offer environmental education and services to the Western Area Rural District and that it is partnering with other organisations like the Environmental Protection Agency, Women’s Agricultural Development Organisation, the Police and Local Councils for the success of the project.

She added that with support from CARITAS Freetown, WoNES distributed hygiene kits and rice to the various communities concluding that the organisation also provides expert advice on issues as and when required through a dedicated team of professionals with diverse expertise.

A tribute to Sierra Leone’s Mamadu...