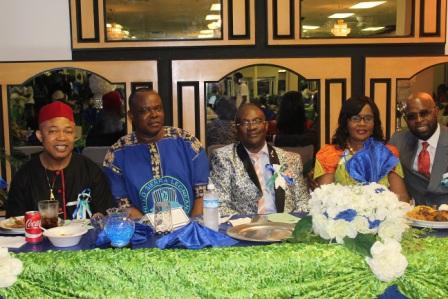 Dallas, Texas: September 22, 2016: Just as the population of Texas is growing faster, so as the Sierra Leone community in the Dallas Fort Worth area in Texas is growing faster than many cities in the United States.  The Sierra Leone community is spreading all across the metropolitan making it difficult to meet and socialize together therefore; finding ways to better meet their communities’ need and expectation became critically important.  (Photo: The High table with Honorary Consul Gerneral Patrick Jackson in the middle)

The USL has its main objective which is to reinforce a common identity and give individuals a sense of belonging within the various counties of Fort Worth.  The organization also has its main goal to liaise with other organizations including churches, social clubs, alumni organizations, and to be part of the umbrella organization, the Association of Sierra Leonean Organizations in Texas (ASLOT).

The launching attracts many community leaders including the Honorary Consul general, Mr. Patrick Jackson who delivers a keynote address and Mr. Patrick Dangawalli as Grand Chief Patron.  Other community leaders including the ASLOT boss, Mr. Reuben Ndomahina and the Mandingo Chief, Dr. Foday Christian Sesay, and many others were all there to support the new organization.  The Tegloma president, Ms. Elizabeth Bockarie was the Master of Ceremony (MC)

In his speech, the Grand Chief Patron, Mr. Patrick Dangawalli informed the audience that it was a wise decision for the formation of USL, noting that it creates a profound competition to capture the American dreams.  He said, competitive self-interest is destructive and will not take us anywhere, but united to come together as this way is good to help us achieve our Diaspora cohesive goals.  Mr. Patrick Dangawalli, President of Sierra Stars Soccer Association believes in mechanism of changes for progress and development, but advised the USL to be steadfast so that they can make a difference in the community taking into consideration the great number of organizations that have already formed.

During its launching at the Torch of Class Event Center, members put on their African fashion designed to showcase their cultural values, and performed cultural dancing where the DJ played mostly Sierra Leone melodies as a significant aspect of the launching ceremony.

Since the emergence of different community organizations in the metropolitan area of Dallas Fort Worth, community structure reflect the natural tendency of individuals living closer to each other and organizes their social groups in order to better achieve common goals.  Recently, another Mandingo organization, headed by Mr. Sorie Tejan was formed after the Mandingo Association headed by Dr. Foday Christian Sesay was formed almost two years ago.  Many community members were astonished to learn about a division of the Mandingo Association.

Critics’ evaluation of too many organizations in one metropolitan area may has an incongruous effect, but others looked at it as a valid reason because individuals are exploiting their closest connections to introduce themselves to new areas of locality interests.

The United Sierra Leoneans will be conducting fundraiser events as a non-profit organization to help remedy some of the problems in its community and back home.  USL is therefore respectfully calling the attention of all Sierra Leoneans for their support to accomplish their goals.

Health of Sierra Leone Pilgrims is...