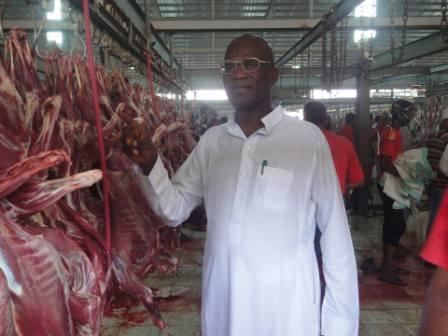 As part of the Hajj rituals, Sierra Leone pilgrims on Tuesday, September 13, 2016 completed the slaughtering of about 800 sheep and goats in the Holy city of Mecca.

Chairman of the 2016 Hajj Committee to Saudi Arabia, Alhaji Sheka Sahid Kamara (alias Shekitoo) led over 20 pilgrims to witness the slaughtering of the animals.

The two-day exercise was done in the presence of Sierra Leone’s Ambassador in Saudi Arabia, H.E Alhaji Mohamed Sillah Kargbo and Representatives were drawn from the 12 Districts in Sierra Leone; 2 from the Western Urban/Rural Areas respectively, the Chief Imam at the Gadaffi Mosque in the East End of Freetown, Sheikh Osman Bangura, a Freetown – based Missionary, Dr. Ahmad Ramadan Jalloh, Paramount Chief Robert Coker Seilolo Papapwe III of Bagruwa Chiefdom in the Moyamba District, an Independent Media Commissioner, Muctar Turay, the Director, Development Assistance Coordination Office (DACO) in the Ministry Finance and Economic Development, Kawusu Kebbay and some Journalists.

Addressing them in the slaughter house, Alhaji Shekitoo told them that he was effectively carrying out the directives of His Excellency, Presid

ent Dr. Ernest Bai Koroma that the Hajj Committee should ensure that the pilgrims should be satisfied in all aspects of the Hajj.

He thanked them for honouring the invitation and to be physically present at the slaughtering house in order to see with their naked eyes the process and procedures of slaughtering. The animals were practically slaughtered in the presence of all and sundry while calling loud the names of each and every pilgrim. Speaking to Journalists after the exercise, most of the pilgrims say they were satisfied and that their presence would avert the controversy and mystery that used to surround the sacrificial process.

Some of the Provincial Reps at the slaughter house

“This year’s slaughtering has been carried out in total transparency leaving no one in doubt about whether their animals have been slaughtered accordingly or not,” P.C Papwe of Moyamba told Voice of Islam’s Chernor Barrie.

“Thanks to the Presidential directives and thanks to the Embassy Officials and Members of the Hajj Committee who made sure that the President’s order was implemented to the letter and to the satisfaction of stakeholders,” the Paramount Chief said.

Before and during the ritual exercise, the pilgrims were given the opportunity by the Hajj Chairman through the permission of the head of slaughter house to take photos and videos to their satisfaction.

He indeed intended to slaughter his son as he dreamt about it. And as an obedient son, Ishmael admonished his dad to do as he was ordered by Allah the Exalted. As he (Ibrahim) was about to carry out the mission of slaughtering his son practically, Jibril ( Gabriel) called him to tell him that Allah had accepted his sacrifice by presenting to him a sacrificial lamb which would serve as a salvation for Ishmael.

That noble Sunnah (practice) instituted by Ibrahim (peace be upon him) was what Prophet Muhammad (May peace and blessing be upon him) emulated and adopted as a part of Hajj rituals for himself and his followers. Thus, as Muslims slaughter their sacrificial lambs, they should recollect the root cause of this very significant part of the pilgrimage.