Homepages
Your trusted place for Sierra Leone and global news
Trending News
HomeFeaturedOkada ban, youth violence: The only way out

Okada ban, youth violence: The only way out 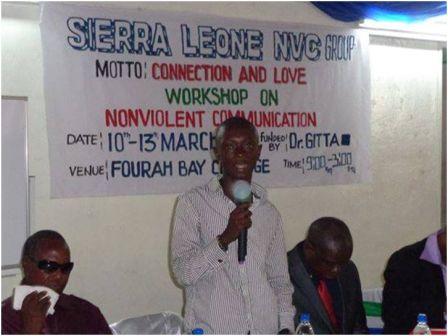 Okada ban, youth violence: The only way out

Violence is now like a tradition among young people in Sierra Leone, This is very worrisome as it is affecting our effort towards enhancing quality education for children. And it is also affecting our economy greatly and threatening the peace, stability and development of our nation.  (Photo: Mr. Edmond Alim B Fornah)

I believe that the issue needs collective effort to tackle it; but for us to achieve our vision, our stakeholders, especially policy makers, should get their acts together and plan well on the provision of sustainable jobs and empowerment of young people in the coming years. If we fail to plan for our youths, then the country will face serious problems as a result of growing number of young people already frustrated by the lack of jobs and other opportunities; they could be a force of instability and social unrest.

One of the greatest problems confronting Sierra Leone since after the war is rising unemployment rate and this situation is a key contributor to the violence which has become common in rest years.

However, over the years, many young people decided to create self employment in the informal sector especially in the area of commercial motor cycle transportation, popularly known as Okada.

According to the Sierra Leone Commercial Bike Riders Union, 85% of the unemployed young people are in the Okada business and 60% of them are based and doing business in the Western Area. It says 55% of these are within the central part of Freetown.

Unfortunately for those in the Western Area, the Minister of Internal Affairs, Hon. Alfred Palo Conteh, hastily implemented a ban that has prevented them from running in the commercial Business District (CBD).

Without passing judgment on the decision of the Hon. Minister,  I must state that before the implementation of such a policy, the Ministry of Internal Affairs should have initiated a long term ministerial and departmental engagement involving the ministries of Transport and Aviation; Youth Affairs; Labor, Employment and Social Security; Trade and Industry; and Political and Public Affairs; as well as the Sierra Leone Police; Office of National Security; and pressure groups like Sierra Leone Labor Congress, as well as the Bike Riders Union. Such a consultation process should have allowed for the discussion of alternative job creation opportunities for the affected young people, or an alternative way to reduce commercial motor cycle in the CBD. This is what should have been done rather than just inviting the President of the Union to a meeting and, without giving him ample time to consult his membership nationwide and do proper sensitization, implement the ban.

Another possible way to have resolved concerns around frequent accidents could have been for both the Government and the Union to engage the importers of the bikes, like the TVS Company or their agent in Sierra Leone, to see how best they can import well built tricycles and also give loans with little or no interest to affected youths to enable them purchase the tricycles and run them in the CBD. At least that will reduce the number of accidents associated with the bikes.

Though it will cause more traffic in the CBD, but I believe if they strategize well, all of these issues will be tackled.

Another alternative is for the government to provide SME loans to affected youths to go into other private business ventures.

In a privileged conversation with some of the affected Okada riders, one of them disclosed to me that he dropped out of school in 2010 because of lack of support from family members. He was forced out of school because he couldn’t afford to pay his fees, and he decided to stay in the street to survive.

“Since I have no money to do business and to go to school, the only option for me is to steal from people,” he said.

“I was into that stealing business until I raised some money to buy motor cycle and went back to school in 2013. It is on this motor cycle [business] that I am paying my fees, feeding and clothing myself and also pay fees for my younger sister in Bombali District,” he added.

This guy further explained that initially he was making close to Le200, 000 a day. He said after the ban he now hardly makes Le50, 000 a day.

“And that is not enough to take care of myself and my family. So if things do not work within the next two months, unless I drop again out of school and go into my former business or engage in any political violence,” he warned.

As at present, there is great potential for violence to increase as the 2018 Presidential and Parliamentary elections draw near. There is a large army of unemployed and disgruntled youths that is ready for hiring by selfish politicians for violence. These youths don’t just like to be violent, they just want to be able to meet their daily survival.

As the saying goes, an idle mind is the devil’s workshop. And as I foresee in the future, unless we create jobs and empower our young people over the next two years, youth violence shall increase tremendously with the potential of reducing all the hard-won peace and gains the country has made. Large groups of unemployed and underemployed young people destabilize their societies, fueling crime and creating conditions where civil conflict becomes more likely. Instead of collecting extra, a country that is not well prepared to make the most of its youths might find itself in the midst of demographic disaster.

“PEKIN NAR PIKIN” is a common phrase often invoked to account for the open aggressiveness and bullying behavior of children. However, over the years, this saying has lost its relevance in today’s youths. There is growing perception in our society that aggressive and anti-social behavior among children and youths have become more confrontational, violent and unusual. Youth violence is also seen as more likely to involve weapons and gangs, to be more destructive, more virulent and to involve female as well as children.

Youths in readiness for violence

We are witnessing an increase of hard evidence to support the commonness and harshness of youth violence in our country, warranting a growing sense of urgency to address the many sides related to this complex social issue.

Violence among children and youths is an issue that needs to be examined and understood thoroughly. It doesn’t seem though that the government is seriously concerned about it.

Recently we have heard demands for tighter controls and harsher measures for dealing with violence within the school system.

Some of the questions being are how best to respond to youth violence; are stricter, more severe, “law and order” responses the best methods of dealing with youth and school violence or would other approaches be more effective? Also there are the questions on whether schools and colleges should revamp their policies and practices concerning student behavior and student discipline, implementing conflict resolution programs, modifying curriculum to promote anti-violence messages and themes, and developing specialized programs for offending individuals.

It appears though that the development and implementation of violence prevention policies and programs in the country is disorganized. Indeed a serious cause for concern and red flag on the national level is now beginning to emerge because of the scale of actions of the youths, students and political groups holding this country to ransom.

We need safer schools, colleges as the foundation for the development of umbrella organizations. We need to work collaboratively to weed off this complex social issue, if we want to develop as a nation.

It’s time for reflection and actions. Please let’s take action to protect the youths and children of Sierra Leone and the future of the country.

By Edmond Alim B Fornah

The author is Founder and Executive Director of Kids Advocacy Network.  Email:edmondalimbfornah@gmail.com Mob: +23279787464