For 33 years in the teaching field of Agriculture – 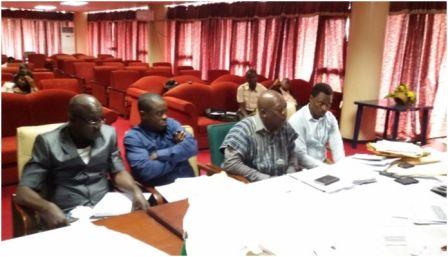 For 33 years in the teaching field of Agriculture –

My Goal, My target And My Feature is to help feed the Nation . . . says IFAD Coordinator.

Addressing the committee the (NPCU) project Coordinator, Dr. Mohamed Tejan Kellah informed MP’s at Committee room 1 that he has spent 33 years in the field of agriculture and his objective is to engage in sustainable agriculture development for self food sufficiency

The IFAD Project Coordinator Dr. Kellah also  recently enlightened Parliamentarians during a joint Committee meeting between Committee on Works, Housing and Infrastructure and Committee on Agriculture on feeder roads. During the meeting Parliamentarians were impressed on the status of the report of his three (3) flagship projects that gears towards promoting farmers at national level including the Rural Finance Programme, the Rehabilitation and Community Base Poverty Programme and Integrating to Adoption to Climate change into Agriculture

Mr. Kellah informed Parliamentarians that IFAD has done a lot to improve the lives of farmers in the country but much has to be done to attain  sustainable food security, pledged to exploit all avenues to attain his goal and recalled in 2009 when he assumed the position of Coordinator that was headed by a German national. IFAD financial controller was also a British born he said but that both were unable to perform satisfactorily which brought their contract to be terminated for incompetency adding that it was not easy for IFAD to disburse even ten percent 10 %. that period.

He recalled that his boss Mr. Feral Borral alongside the Minister of Agriculture put him probation for six (6) months but performed to their admiration pointing out that the Ministry of agriculture had a performance bureau criterion to meet.

He also recalled that funding from the Africa Development Bank (ADB), World Bank, amongst others presented a report on a per-review which for over six (6) years indicating his performance excellent adding that the Rural CARDEP had also been performed outstanding under his leadership noting that the ICRP project was also been graded as the second best performing project implemented.

He further disclosed that out of 23 countries in the West and Central Africa, Sierra Leone was ranked at the bottom but later emerged second position.

Dr. Kellah informed that he was awarded in 2014, a gender award as IFAD one of the best finance institutions with a specialized agency that seeks to promote and overcome poverty and hunger in the country and the World at large.

He said that they are also supposed to implement ten thousands hectares of COCOA as well as oil palm which the ICRP project had achieved 99 percent of implementation.

He inform the propose plans of constructing roads and establishment of Fifty one (51) financial banks transaction as well as community banks and more remaining banks at national level in Koinadugu District and across the country to ensure that they promote the citizens of this country through sustainable agricultural programs and also highlighted the construction of 120 miles in the Koinadugu district that now linked to the various communities such at Kurbola and Kono.

He continued that IFAD has also constructed Forty a metre bridge that was in a deplorable state to reach other communities.

He went further to disclosed that the first project which is Rural Finance programme cost Ten Million United State Dollars for  phase (1) implementation as they were also been awarded the sum of USD 1,150 for phase (11) for excellent performance job adding that they have also established micro finance through the village bank as well as organized the people to buy shares and received loans.

He furthered that before this time access to Rural Financing was a huge challenge that only based upon the request from the Ministry of Agriculture and the government of Sierra Leone. He added that IFAD was able to provide huge amount of money to establish micro financing institutions across the country including the financing service association, the village banks, as well as the community banks that were initially those banks established by the Bank of Sierra Leone.

Dr. Kellah also disclosed that the Rural community mobilized resources to buy shares and receive loans noting that the farmers have also bought shares over four million dollars but were given seven million dollars.

He said the APEX Bank was been given the responsibility to regulate, monitor, and supervise the Banks by  training and audit the affairs of the banking transaction for which the central banks for those financial transaction have provided more finances as well as collaborate with those financial institutions.

The meeting was also been attended by senior officials from IFAD secretariat including senior procurement officer, James Foh who also

In his opening statement Acting Chairman Hon. Aaron Aruna Koroma of Constituency 062 in Mile 91 in Yoni Chiefdom in Tonkolili District expressed his appreciation to the project coordinator, Dr. Kellah and team for such a brilliant report that  geared towards promoting sustainable agricultural growth in the country.

Hon. Aaron A. Koroma went on to remind the coordinator that they were communicated for  the meeting as per scheduled adding that as Members of Parliament they would welcome the substantive Chairman, Hon. Alimamy G. Kargbo and IFAD team but also observed that the meeting critically focus on the four project implemented by IFAD.

He said the team supposed to have meet on the 6th and 9th of August as per schedule to discussed the relevance of IFAD projects as this delay was considered to be contempt in Parliament. The IFAD coordinator Dr. Mohamed Tejan Kellah responded that all the previous correspondences were directly directed to IFAD but that this time the letters were directed to the Ministry of Agriculture Permanent Secretary.

Hon. Aaron A. Koroma further disclosed that Members of Parliament have no intension to witch hunt anybody but to ensure that they perform their Oversight functions which is to monitor, supervise and investigate every MDAs as well as institutions, departments that received funds for and on behalf of the people of Sierra Leone especially when they are the peoples representatives to ascertain whether those monies were utilized for their intended purpose for the people of this country.

He also described and encourages the team to considered the meeting a collaborative session and special with their mandate as Parliamentarians pursuant to section 93, sub section 94,95 and 96 of the 1991 Constitutions regarding loan, grant received for and on behalf of the people of this country needs accountability status report.

Main while Clerk of Committee Osman Kokofela administered the Oath of mandate for affirmation which gears towards investigation, enquiring for performing functions through section 93 (6) as well as section 95 which talks about contempt and impeachment to Parliament of the 1991 Constitution of Sierra Leone.