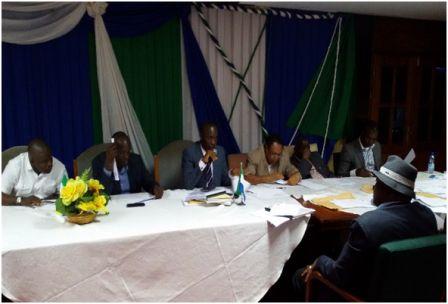 The Parliamentary Oversight Committee on Agriculture, Forestry and Food Security (MAFFS) on Tuesday 9th August expressed its appreciation to the Executive Director of National Protected Area Authority NPAA, Dr. Kollah Bangura, for his commitment and dedication.  (Photo: Acting Chairman on Agriculture Hon. Aaron A. Koroma and Committee Members at the high table)

In his statement, the Chairman of the Committee, Hon. Aaron A. Koroma, reiterated that it is their responsibility and constitutional mandate as lawmakers to monitor, supervise and ensure that every proper agricultural development work and funds for various sectoral developments are properly utilized for their intended purposes.

He said they also seek to meet safety standards with the required provisions for the betterment of the country, noting that they were not in any way trying to intimidate or witch-hunt anyone but to conduct oversight functions.

The Chairman therefore encouraged the NPAA Executive Director, Dr. Kollah Bangura, to be fully cooperative with the Committee in terms of presentation that could be significantly used against, adding that project grant by European Union (EU) will be passed through Parliament to enhance and promote the Agenda for Prosperity. Responding, Dr. Kollah Bangura gave a brief background report of the REDD + Project Grant as at 2015 to July 2016.

The Executive Director also noted that the REDD + Project is aimed at capacity building in the country through the NPAA and the Conversation Trust Funds in the MAFFS that intends to assist responsible institutions in their efforts to become ever ready for the REED + Project.

He further said the project is part of the Global Climate Change Alliance program aimed at building up the capacity of every public institution to reverse the current trend of deforestation and degradation through the introduction of pro-poor oriented PES Scheme of the REDD +.

Dr. Bangura also said the project seeks to contribute more awareness raising on environmental and climate change, and to pilot on the sustainable charcoal production as well as preparing the ground for investment into solar energy through undertaking a spatial potentiality study.

The Executive Director disclosed that the project has achieved five main results including the institutional strengthening of MAFFS and NPAA, support towards REDD + readiness, sustainable charcoal production, and environmental awareness raising.

Dr. Bangura further disclosed that the two years of project costs working initiative development grant totalled Euro 1, 210, 503, 19 but they only received Euro 663, 108.93 which they implemented and sent their report to the funding development partner.

He disclosed that they are awaiting the second phase of the project for implementation.