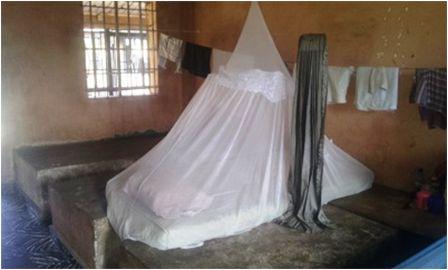 He was 15 years when he was brought to the remand home for juveniles in Kingtom, Freetown, after he was arrested for alleged sexual penetration in his home town of Masiaka in Northern Sierra Leone. He had to be brought this far, about 72 km drive, because the other remand home for juveniles- the only one in the provinces in fact, is farther away in the city of Bo in the South of the country.  (Photo: Most of the inmates share mattresses and nets, and a few sleep on the cold floor)

Mohamed Sesay* has now spent three years at the remand home without trial. According to the officials at the detention center, no indictment papers (the documents required for an accused person to stand trial in the High Court) have been filed. In fact, the complainant has never appeared to pursue the case against the boy. After looking almost everywhere for their son without success, the family gave up and concluded that he must have been dead. And they had since performed the necessary funeral rites in his honor.

Mohamed’s case is quite common among the 30 or so inmates (3 females, 27 boys – the numbers fluctuate) at the remand home in Kingtom. They are between the ages of 13 to 17 and held for alleged offenses ranging from murder and larceny to sexual penetration. There is usually delay by the Law Officers Department in producing the documents required for them to appear in court, and consequently they spend long periods in detention without trial.

“Most times their court papers are produced late, sometimes not at all,” said David Conteh, Officer-in-Charge in the remand home. “This is a huge challenge for us, and it’s not in the best interest of the inmates. About 10 of them have been here since 2013 without trial.”

For some cases, he continued, there are no files in fact. There’s Mary Sankoh waiting for indictment, who’s also not even attending court. There’s Saidu Kamara, accused of sacrilege (stealing from a church), whose case has been committed to the high court. He came in at the age of 16 and will be 18 this year. There’s nobody to bail him for a sum of three hundred thousand Leones and a passport book. Morlai Sama, who claimed his parents didn’t know he was being held in the remand home, has also spent two years without trial for alleged wounding with intent. 16 year-old Abdul Koroma allegedly killed his uncle, while Unisa Turay, 13 years, was held for alleged sexual penetration; he claimed his parents are in Rokel.

Officials at the Law Officers Department refused to comment on the thorny issue of late indictment, noting that they do not normally grant interviews to the media.

The problem of delayed indictments is compounded by logistical challenges including lack of vehicles and adequate staff to escort to court the few inmates whose cases come up for hearing.

“Mobility is a huge challenge as there are usually no vehicles available to transport inmates to attend court sittings when they are due to appear. Some of the inmates have on many occasions failed to appear because of this,”  said Probation Officer, Sheka Sawaneh.

“It is difficult to trace their families without a vehicle or some other form of transportation,” continued Sawaneh. “Most of the inmates don’t even know phone numbers or addresses of  family members.”

In addition, the inmates, especially the boys, are not receiving sufficient legal advice as most of them don’t even know if they have a lawyer to represent them when they appear in court, and they said that paralegals come very rarely to inquire about their situation.

Jesus is Freedom: inmates express their faith and hope through sketches on the walls of their dormitories

AdvocAid, a non-governmental women’s rights organization, advocates for the rights of detainees in Sierra Leone in order to change laws and improve legal practices for the benefit of both genders. They only represent girls in the remand home in Kingtom and Bo, but occasionally do referrals for male cases. The organization’s Executive Director, Simitie Lavaly, said they don’t have the resources to represent the boys as well, so they prioritize the girls’ cases. Lack of donor funding means they (and other organizations) can only do few activities for the girls.

The government-funded remand home is supposed to be a reformation center for juveniles, who come in contact with the law, but there’s not much, if any, reform activity going on there at the moment. There is no formal education program in place and this means these school age children, after spending long periods on remand, go back to their communities worse off than they were.

“The longer they [the inmates] stay here the more problematic they become because we don’t have much reform activities going on. At the end of the day, when we send them back to their communities they will resume their old ways,” explained Conteh, adding that conditions worsened after the Ebola outbreak.

Before the Ebola outbreak, partner NGOs assisted with materials for skills training. The inmates learned skills in tailoring, carpentry, arts and craft and weaving. They produced items, which they sometimes sold to visitors. Now, according to Conteh, the partners complain about lack of funding.

“We have tailoring machines, for example, but no money to buy the materials. For most times they [the inmates] are idle. And you know that an idle mind is the devil’s playground. We need to invest in their talents,” Conteh mourned.

He further lamented how the lack of recourses for food, medicine, clothes, recreational activities, and rehabilitation is affecting both staff and inmates.

“Food is now a problem,” Conteh explained. “They were used to three meals a day, but now it’s two and the quality has dropped drastically. This tells negatively on their health and attitude.”

The government’s quota has reduced sharply from 14 bags of rice monthly to seven. It is understood that the supplier of food and sanitary items to the remand home has not been paid for over a year now, so the person now only supplies a few things while waiting for payment.

First aid facilities are lacking. As a result, Conteh said that minor cases could not be treated. Because it’s the rainy season, the inmates develop colds, toothaches and swollen feet. They lack clothes and slippers and the floors are cold. The roofs leak, the mattresses are flat and few, and mosquito nets are insufficient. There are no toiletries and sanitary items.

However, Conteh explained that serious cases of illness are normally sent to clinics, and a nongovernmental organization called GOAL usually pays the bill. Once every two months, he said, another NGO called Caritas do on-the-spot medical check-up on the inmates.

Nevertheless, conditions in the remand home in Kingtom, as well as in the other one in the city of Bo, clearly violate standard minimum rules for the handling of juvenile detainees as well as procedures for child protection outlined in Sierra Leone’s 2007 Child Rights Act and the Children and Young Persons Act, Cap 44 of the Laws of Sierra Leone 1961.

Security in the remand home is vulnerable because of lack of adequate staff. The centre used to have up to 25 officers, but since some transfers were made to the main correctional centre on Pademba Road they’ve not been replaced. Now there’s roughly one correctional officer to three inmates. Four volunteers from the Ministry of Social Welfare, Gender and Children’s Affairs have reportedly worked for two years without stipends.

“Lack of staff is a big security issue,” said Sgt Mohamed Turay, one of the security officers at the center. The security unit manages conflict among the inmates, escorts them to court when they are due and to the clinic when they are seriously ill. “We cannot do all of this with limited staff.”

“On Saturdays we normally take them out to the terrace to play football and on Sundays they watch movies. The exercise on Saturdays is done under tight security. We need activities like these to keep them busy and so our work will be less difficult,” said Sgt Turay, adding however that for now the Saturday exercises are rare because of limited staff to provide security.

On the Day of the African Child 2016, AdvocAid highlighted a bigger need for long-term care and legal aid for children in the criminal justice system in the small Mano River Union country, which is struggling to rebound from the impact of a devastating Ebola outbreak and the fall in its lucrative mining sector.

“We are mobilizing resources, support and connections to improve the physical conditions in the remand homes as well as change the context that enables neglect of children behind bars in Sierra Leone,” said Lavaly. “We are calling for attention to this issue, because we can’t just watch while these children are being neglected. As we don’t have the resources to deal with the challenges on our own, we are urging government, INGO’s and donors to allocate more resources and time to child justice.”

For now, the only activity that seems to be working at the remand home in Kingtom is psycho-social counseling, which often includes drama and other related activities. The churches come in regularly to talk to the inmates and encourage them to pray.

On this particular day, the counseling and prayer session has just ended when Mohamed’s father and younger sister appeared at the center. Probation Officer Sawaneh finally traced the family all the way to Masiaka and told them about their son.

“I am so happy, only God knows how,” Mohamed’s sister, Fatmata, cried in joy. His father was dumbfounded as he gazed at his son in disbelief. According to Sawaneh, the family came to plead with the officials to secure the temporal release of their son until his indictment papers are ready. And that is not certain.

Note: *Names of inmates used are fictional to protect their identities.