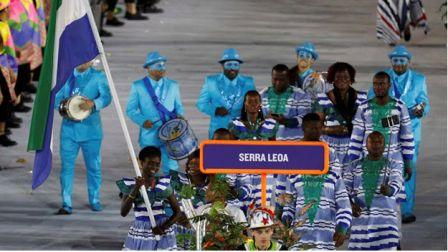 The opening ceremony parade is one which the 207 participating countries used to pay homage to their national colours while also looking stylish and keeping the athletes’ comfort in mind.

For the past Olympic Games, the rating of nations during the parade has attracted more attention with several media international media institutions drawing their own chart of best and worst dressed teams.

America based institution,  USA Today sports ranked sierra Leone attire as the 17th best outfit in the parade while their West African counterpart Benin were highly ranked in 6th position.

The Sierra Leone delegation dressed in an all designed African attire which portrays the country’s national colours. The beautifully designed African outfit is dominated in blue and white cotton while the front is well tailored with green threads.

Journalist pair; Jenna Clarke and Mary Ward said: “One word for the Sierra Leone dress, wearable. The nautical number can take you from day to night or Olympic Opening Ceremony to a cousin’s wedding.”