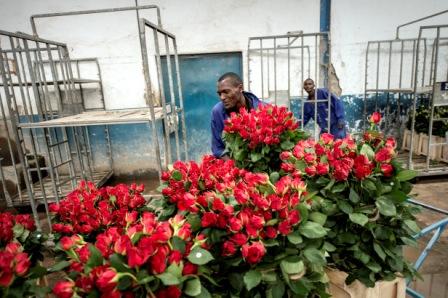 African economies may be severely affected by Britain’s exit

By 6:30 a.m. on 24 June, less than 12 hours after a successful referendum on Brexit (Britain’s exit from the European Union), South Africa’s currency, the rand, took the first blow. It plunged by almost 8% from R14.33 to R15.45 against the US dollar, its steepest single-day decline since the 2008 financial crisis.  (Photo: A worker moves boxes of roses from a trolley at the Maridadi commercial flower farm in Naivasha, Kenya. Photo: Panos/Sven Torfinn)

Brexit sent shock waves through the global markets, including those in Africa.

Investors in African markets panicked because many economies (such as Angola, Nigeria, South Africa, and Zambia) were already reeling from low commodity prices exacerbated by a sluggish global demand. In these countries, Brexit added salt to the wounds of injured economies.

On what happens next, experts are uncertain, and African governments may need to redefine their trade and diplomatic relations with a post-Brexit Britain and Europe.

Trade and investment will be affected most by Brexit. Most of the trade arrangements the UK has with African countries were negotiated through the EU. This means the agreements will cease to apply or will have to be renegotiated when the UK finally leaves the EU, a process that will take two years from the time it officially informs the EU of its intention to pull out.

It will be a difficult time for Africa, as the UK will no longer shape and lead some of the most important initiatives on the African continent that form the basis of co-operation between Europe and the continent. Trade agreements often take considerable time to hash out, and the uncertainty of the intervening period could complicate exports to the UK.

The emerging markets and frontier asset markets will be affected too. South Africa, a former British colony and one of Africa’s advanced economies, could be hard hit, among others.

In short, South Africa’s economy suffers whenever the British economy slumps. Many South African companies are listed on both the Johannesburg and London stock exchanges, and several South African banks depend on British cash reserves. Since the country exports 10% of its wines to the UK, for instance, the industry is already bracing for future losses.

Brexit will cost Britain’s GDP a cumulative drop of 2.75 percentage points in the coming 18 months, say Jan Hatzius and Sven Jari Stehn, economists working with the investment bank Goldman Sachs. They predict that the GDP could fall to as low as -1%, effectively a recession, described by economists as two consecutive quarters of negative growth.

Larry Fink, chairman of the world’s largest asset management firm, BlackRock, agrees, noting that Brexit could lead to a slowdown in trade with the EU, lower investor confidence and high unemployment.

This is not good news for South Africa and Britain’s other African top trading partners, particularly Nigeria, Kenya and Egypt.

Before Brexit, bilateral trade between Nigeria, Africa’s largest economy, and Britain was worth about £6 billion ($7.9 billion), and had been projected to reach £20 billion ($26.6 billion) by 2020. With Brexit, that projection looks overly optimistic.

Nigeria is grappling with falling oil prices, its main income source. Crude chemicals and allied materials make up almost a quarter of Nigeria’s trade with Britain. A potential drop in oil demand coupled with low oil prices could dim the Nigerian economy’s prospects for recovery.

Tunji Andrews, a Lagos-based economist, says Nigeria cannot rely on the EU to make up for the shortfall in earnings if the British economy goes into a recession.

Kenya, Britain’s third largest market in Africa, could witness capital flight after Brexit, leading to falling exports. This would weaken the Kenyan shilling and make imports more expensive for a country that has already seen a 10% increase in import bills in the past five years.

Kenya’s lucrative cut flower industry, for which Britain is the second-largest export market after the Netherlands, could suffer. A trade deal on flower exports between the East African country and the EU was in the works before Brexit.

If a trade deal between the East African Community and the EU is stalled by Brexit, Kenya stands to lose billions of shillings which could lead to uncertainty for Kenyan exports.

Kenya will now have to negotiate separate deals with Britain and the EU—a potentially difficult task. Without such deals, Kenya may lose up to 4 billion Kenyan shillings ($39 million) a month, predicts the Kenya Flowers Association, which represents flower businesses in the country.

The direct impact on trade aside, Brexit is expected to affect British development aid to Africa. Britain contributed about £409 million ($543 million), or 14.8%, to the European Development Fund (EDF)’s 2014 budget, which the EU uses to support development in poor countries. Without Britain’s contribution, the EDF will have less money, and this will affect EU-funded projects, including road construction projects in countries like Tanzania.

Britain can directly finance projects in Africa through its international aid programmes, such as the Department for International Development, but it can only support a small number of countries, says Kevin Watkins, a Brookings Institution non-resident senior fellow.

A limping British economy with a potentially weakened currency may not continue the current level of assistance to countries such as Ethiopia and Sierra Leone that rely heavily on British aid. In 2014, for example, Britain provided £238 million ($416 million) in aid to Sierra Leone, which was 6.8 % of the country’s economy, according to the World Bank. That same year, Ethiopia received £322 million ($425 million), 0.8 % of Ethiopia’s economy.

Besides exports and international aid, a sluggish British economy may slow remittances by the African diaspora in Britain. Remittances provide a much-needed cash injection into African economies. In 2014, for example, Nigerian immigrants in Britain remitted $3.7 billion, the most among African immigrants.

Despite fears that Brexit could dislocate African economies, some experts see positive developments for countries like Libya and Zimbabwe, currently under EU sanctions championed by Britain, according to The Herald, a Zimbabwean daily. With Brexit, the EU might be encouraged to review these sanctions and possibly re-engage with these countries.

“Britain will be able to focus more on our bilateral relationships with Africa and with our traditional partners and to really look at Africa for its needs rather than looking at it through the prism of the EU, that is an outdated model that may have fit in the 1970s but is wholly inappropriate now for the UK or a wholly inappropriate way to define the UK-Africa relationship,” says James Duddridge, a former British minister for Africa and a Brexit supporter, in an interview with Radio France Internationale. Without the EU, he said, ties between Britain and Africa will get stronger.

Earlier this year, Mr. Duddridge criticised the EU’s decision to reduce funding for the African Union Mission in Somali (AMISOM), which is helping to bring peace to that country. The decision was against Britain’s wishes, he says, adding that Britain could in the future decide to deploy its own troops to Somalia.

The good news is that Africa can actually seek assistance elsewhere. Africa’s trade with Europe, estimated at $106 billion in 2016, has been eclipsed by China’s. Worth an estimated $300 billion, China is Africa’s top trading partner currently.

With China, the US, Brazil, India and others strengthening their relations with Africa, the continent could look elsewhere if its ties with Britain or the EU get complicated in a post-Brexit era.

In America, Anyone can become Pres...