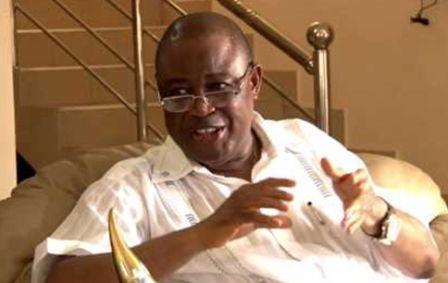 The Minister, Professor Monty Patrictk Jones was joined by his of Deputy Hon. Marie Jalloh, and team from the Ministry to meet with farmers in Makeni, Bombali District were the he handed over two cheques of Le100, 000, 000 each to the National Association of Farmers Federation in Sierra Leone (NAFFSL) and Sierra Leone Women’s Farmers Forum (SLEWOFF). These are umbrella organizations that coordinate and drive the activities of the farmers.

The District Council Chairman and the Paramount Chief Member of Parliament Bombali District present at the all important meeting.

The Ministers and team also went to Koinadugu District where they met with vegetable farmers led by Haja Sundu Marah and others,. A cheque of Le 25,000,000 (twenty five million Leones) was handed over to them. The Minister made a policy statement that 80% of all devolved funds from Government of Sierra Leone to Agriculture .i.e. the District Agricultural Office should be given as support farmers. Prof. Monty Jones emphasized on the use of the Community Banks as they are been created to support farmers.

He encouraged farmers to transform their potentials to providing enough food for the nation. Food, he said should be available, affordable, accessible and sustainable. He reiterated the fact the Commercial Agriculture must be part of them because it pays a lot. “We should add value to our produce and market them well,” the Minister advised farmers, and pledged his Ministry’s support to transform farming activities in the country.

He assured that he is here to help farmers and will do so with the best of his ability to ensure that agriculture stimulate growth in other sectors of the economy. “I will continue to strengthen the decentralization of agriculture in the country,” he said, noting that farmers should be ready to increase production and productivity, which will enable them become rich. “We must shift from subsistence farming and become business farmers that practice mechanized farming. The country, he said will soon be flooded with machines. The Minister encouraged farmers to have their bank accounts as the ministry is willing to provide incentives through community banks in the form of loan with a single digit interest.

Professor Jones informed farmers and stakeholders that agriculture should stimulate growth in all sectors of the economy, and added that increasing productivity will enable them to make money. Farmers, he said should be the richest in the country if only they make good use of the country’s natural resources  and change their mindset to become business farmers.

Agriculture Minister, Prof. Monty Patrick Jones President Koroma wants to see prosperity in every Sierra Leonean and would want them to be eating food produced in the country. Agriculture has a role to make this happen.

He noted that farmers should increase productivity not only on rice but also cassava, potato, beans, cattle, cashew and other cash crops. “The next thing is to increase income by adding value to your produce and be ready to take your goods to the market,” the Minister said, and added that farmers should be made to reap benefit from their land with their own style.

The Minister is making rounds again to make sure that the farmers received seeds, and Fertilizers are been distributed. “We should make sure that we double or triple production and productivity. All this will tie up with the Presidential Post Ebola Recovery Strategy 10-24 month, creating 10,000 jobs along the agricultural value chain,” he said.

The agenda for prosperity is worki...