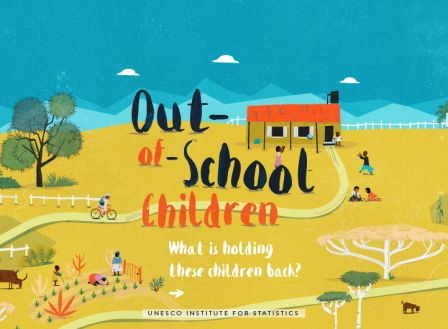 At least half of youth between the ages of 15 and 17 in sub-Saharan Africa are not in school, according to new data from the UNESCO Institute for Statistics. In total, more than 93 million children and youth of primary and secondary school ages are out of school across the region. At least 15 million of these children will never set foot in a classroom, with girls facing the biggest barriers.

The data, released in a new paper released jointly by the UNESCO Institute for Statistics (UIS) and the Global Education Monitoring (GEM) Report, shows that, in Nigeria alone, there are 8.7 million children who should be attending primary school but are not. Sudan and Ethiopia, with 2.7 million and 2.1 million primary-school-aged children out of school, follow closely behind.

“Countries have promised to provide every child with a primary and secondary education by 2030. These new findings show the hard work ahead if we are to reach this goal,” said UNESCO Director-General Irina Bokova. “Our focus must be on inclusion from the earliest age and right through the learning cycle, on policies that address the barriers at every stage, with special attention to girls who still face the greatest disadvantage.”

The paper shows how failing to prioritise primary enrolment leaves millions out of school at a later age. The out-of-school rate in sub-Saharan Africa is 21%, 34% and 58% for primary, lower secondary and upper secondary school age groups respectively. This means that more than half of 15 to 17-year-olds in sub-Saharan Africa are not in school – the highest rate for any region in the world, according to UIS data.

Conflict continues to rob millions of their right to education. Across the region, about one out three out-of-school children and youth live in areas affected by conflict.

Poverty also creates a significant challenge to accessing education: in sub-Saharan, only 65 of the poorest children for every 100 of the richest go to primary school, according to GEM Report analysis.

The GEM Report proposes a few key policy options to get all adolescents and youth into secondary education, which include extending the coverage of compulsory education to at least nine years and beyond, raising the minimum age for admission to employment, and enforcing the implementation of conventions on child labour, providing financial support to poor families to cover the costs of schooling; and making secondary education more relevant to young people with diversified curricula and learner-centred approaches to teaching.

ACC has jurisdiction over private...