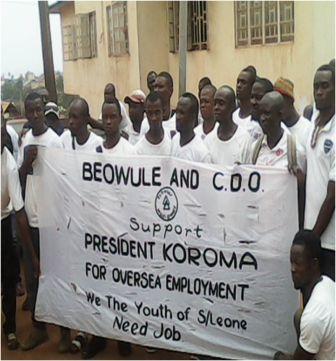 This medium has been closely following the activities of the Central Development Organization (CDO) in connection with the American/Ugandan company, Beowulf Worldwide.

According to our findings, the Chief Executive Officer (CEO), Sisto Andama has joined Sierra Leoneans to demonstrate the undying love he has for the development of Sierra Leone.

The CEO Beowulf Worldwide, Mr. Andama, has been contracted to provide overseas employment for various countries around the world, including Qatar, South Korea, Afghanistan, Iraq and Dubai.

It was against this backdrop that the philanthropist, Sisto Andama turned his attention to Sierra Leone where the rate of unemployment is overwhelmingly sickening.

It could be recalled that recently, some Sierra Leoneans ganged up in an attempt to destroy the good intentions of the philanthropist by branding him as ‘’Fake Overseas Employer’’ when there are authentic documents to prove the credibility of the company the world over.

Although it was alleged that the Minister of Labour and Social Security, Hon. Mathew Timbo texted that Beowulf Worldwide is not at the Ministry’s database, most documents from the designated Ministry did not only bear the Minister’s signature but they have also passed through the Trans Organize Crime Unit (TOCU) for background check.

In another development, Beowulf Worldwide has purchased over thirty five (35) acres of land at Lungi in the Port Loko District where over six hundred men have been deployed for bush clearing so that qualified members of the company would be trained before their final deployment to various countries around the world.

Apart from his affluence in getting overseas employment for people, Mr. Andama has provided thousands of jobs for Sierra Leoneans in Rutile, Makeni, Bo, Kenema and beyond, as well as supervising the ultra-modern Sewa Ground Market construction project.

“With such progressive development undertaken by Sisto Andama, it beats everyone’s imagination that a group of spineless Sierra Leoneans have embarked on a smearing campaign to hinder the prosperity of their brothers and sisters,” said a concerned citizen.

He advised that Sierra Leoneans should shrug aside hatred and vindictiveness in order to show love to one another for the development of Mama Salone.

JFK Selected for “Excellence in Le...