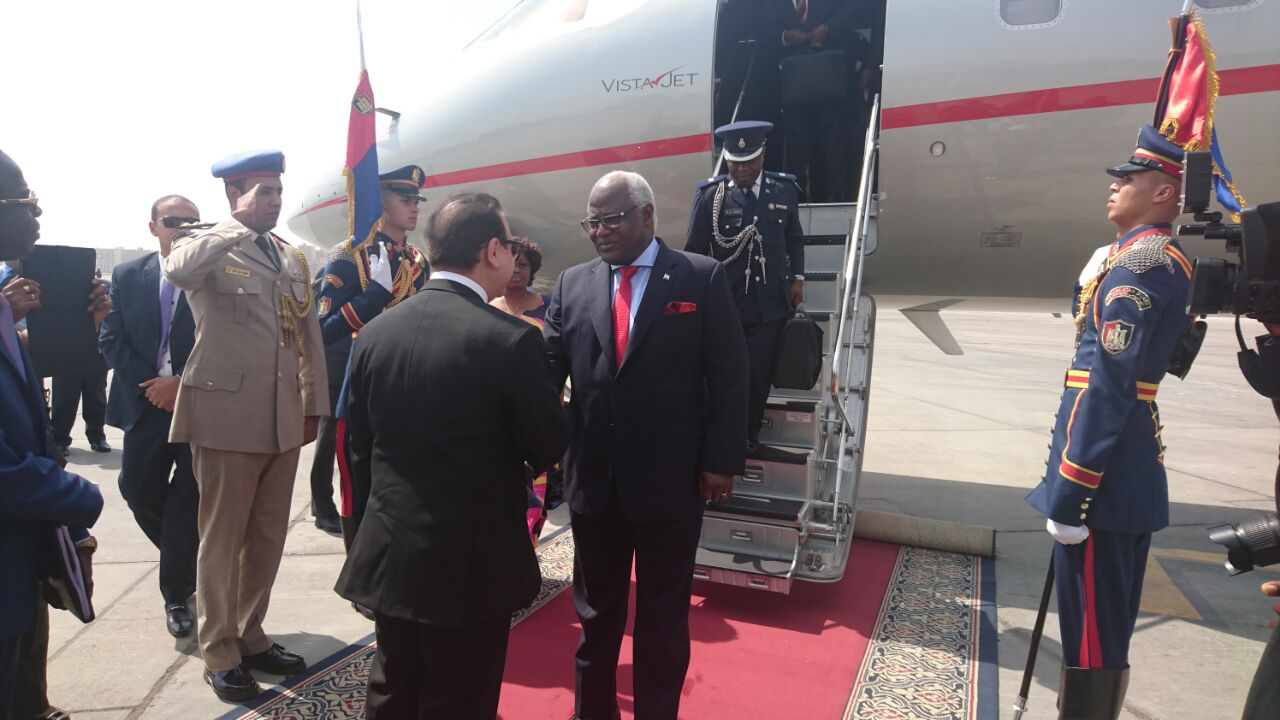 His Excellency the President was received on arrival at the Presidential Lounge of the Cairo International Airport by the Egyptian Minister of Communications and Information Technology, Eng. Yaser Al-Kadi, senior Government officials and the Minister Counsellor/Head of Chancery at the Sierra Leone Embassy in Riyadh, Saudi Arabia, Sulay-Manah Kpukumu, deputizing Sierra Leone’s Ambassador accredited to the Arab Republic of Egypt, Alhaji M.S Kargbo who is currently on another presidential assignment.

A red carpet was rolled out for the President as he arrived with his high-level delegation, including, Foreign and International Cooperation Minister, Dr. Samura M. Kamara, Sierra Leone’s Envoy to the Federal Democratic Republic of Ethiopia and Permanent Representative to the African Union, Ambassador Osman Keh Kamara, newly appointed Presidential Spokesman, Abdulai Bayraytay, Personal Assistant to His Excellency the President, Brian Gilpin, The Director of International and Legal Affairs Division in the Foreign Ministry, Saidu Nallo, among other dignitaries.

At the headquarters of the Presidency of the Republic at Heliopolis, His Excellency the President, Dr. Ernest Bai Koroma was warmly received by his brother and colleague, His Excellency Abdel Fattah el-Sisi where they held talks on a broad range of issues bordering on bilateral and multilateral cooperation.

Speaking to me in a brief interview after the closed door meeting with the two Heads of State, Presidential Spokesman, Abdulai Bayratay says the two leaders held fruitful discussions on issues of mutual interest and cooperation. He further says they focused on cooperation in health, maritime resources as well as security issues.

It is worthy to note that the African Union plays an increasingly important role in peacekeeping and conflict resolution. This is demonstrated by the African Union’s increased will and capacity to partner with the UN in carrying out hybrid missions in Somalia and the Darfur region of Sudan as well as supporting peace process efforts in the Republic of Mali and elsewhere on the continent.

President Koroma arrived in Cairo from the Chadian capital, N’Djamena, where he held similar bilateral engagement and he is also scheduled to proceed to Harare, Zimbabwe (three-nation outreach) on the African Union C-10 to elicit views of his peers on the ongoing UN Security Council reform dialogue going forward into the 11th year of the campaign before he returns to Freetown on Thursday.

According to the eloquent Presidential Spokesman, the meetings are to further consult on the way forward in the pursuit of the Common African Position on the UN reform and with a view to ensuring that Africa continues to speak with one voice and to secure two permanent seats and a total of no less than five non-Permanent seats in the Security Council of the UN.