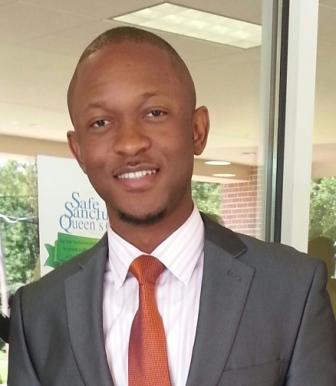 23 June, 2016 –  The Queen presented an award to the 2016 Queen’s Young Leader from Sierra Leone in a special ceremony at Buckingham Palace. His Royal Highness Prince Harry attended the event in support of The Queen, which recognised exceptional young people from across the Commonwealth who are making lasting change in their communities.

Speaking at the ceremony, Prince Harry said: “The Queen’s Young Leaders award recognises what you have achieved, not for yourselves, but for your communities, for your peers, and for those less fortunate.

“You have already been an inspiration to so many; but I hope this award will inspire you to go out and achieve even greater things in the future, empowered by the network of leaders you now sit amongst.”

David Beckham said: “I am thrilled to be here once again to help Her Majesty The Queen in congratulating a new group of inspiring young leaders. I know those who won last year are continuing to build on the opportunities the award has provided them. I look forward to following the progress of the class of 2016 and have no doubt we will be seeing a lot this year’s exceptional group of young people as they continue to make lasting change in their communities.”

In what is a royal first, Buckingham Palace opened its doors to vlogger Alfie Deyes, who was given special access to document the occasion via his social media channels. Speaking about his involvement in The Queen’s Young Leaders ceremony, Alfie said:  “To be the first vlogger to be given access to Buckingham Palace has been a massive privilege. It was amazing to meet all of the Queen’s Young Leaders and to hear about all of the incredible work they are doing around the world.”

In the year of Her Majesty The Queen’s 90th birthday, The Queen’s Young Leaders, including winner Howard Nelson-Williams from Sierra Leone, have all been taking part in a series of high-level engagements across London and in Cambridge over the course of the past week.

This has included participating in a challenge set by global social networking company Twitter, meeting Senior Executives at BBC World News and visiting 10 Downing Street. As part of the programme they also received leadership training at the University of Cambridge’s Institute of Continuing Education, met UK business leaders from Standard Chartered, AMV BBDO and PWC and heard from leaders from UK charities working to deliver life-changing projects. This year’s Queen’s Young Leaders programme will conclude tomorrow with a visit to Marlborough House to meet the Commonwealth Secretary-General and High Commissioners, followed by an exclusive event at The Shard.

The search for the 2017 Queen’s Young Leaders Award Winners opens at 8 pm BST on Friday 24 June 2017. If you or someone you know is doing exceptional work in their community apply or nominate them at www.queensyoungleaders.com

Her Majesty The Queen to honour young pe...