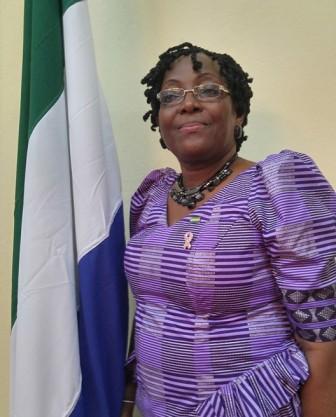 The Media and Communications Specialist in the Ministry of Political and Public Affairs, Mr. Jogor Barrie, has intimated that the Nigerian High Commissioner to Sierra Leone, Her Excellency Mrs. Gladys Modupeola Quist-Adebiyivi, and entourage paid a courtesy on the Ministry on Tuesday 14th June, 2016.

Mr. Barrie said the Minister reiterated the long standing political and diplomatic relationship between Sierra Leone and Nigeria and that the country depends heavily on foreign assistance from both bilateral and multilateral donors, citing their intervention during the outbreak of Ebola when Nigeria was among the largest bilateral donors, as well as Nigeria’s intervention during the country’s eleven years of civil conflict.

Mr. Barrie also informed that the High Commissioner congratulated the Minister and team for the tremendous strides they have made since the Minister assumed office early this year.

He added that Mrs. Gladys Modupeola Quist-Adebiyivi emphasized the need for Sierra Leonean youths to put their acts together for national development and take on agriculture head-on for self-sufficiency as a nation.

The focal person, African Peer Review Mechanism (APRM), Prof. Dr. Osman Gbla,   thanked the High Commissioner on behalf of the Government of Sierra Leone for her Government’s commitment to the APRM Secretariat, stressing the progress Sierra Leone has made in the APRM.

The Project Officer in the Office of the Diaspora, Madam Zainab Kamara, said the office is working under the supervision of the Ministry of Political and Public Affairs.

The Deputy Minister of Political and Public Affairs, Akmed Femi Mansaray, said it was a blessing for the Nigerian High Commissioner to visit the Ministry, adding that they were looking forward to seeing a peaceful coexistence between the two sister countries.

Commissioners for Oaths and Notary...