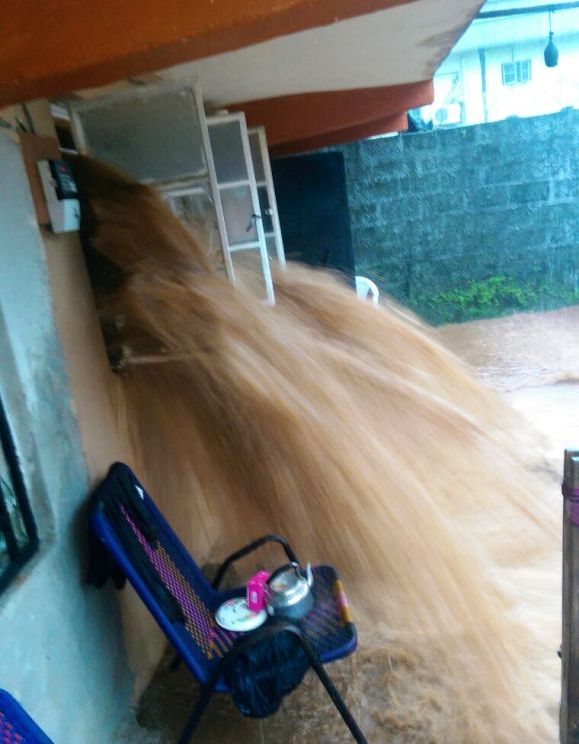 Flood victims that were forcefully removed from their temporal settlement at the National Stadium in Freetown and relocated to 6 Mile continue to languish and perish in their new settlement, Sierra Express Media can authoritatively reveal.

Most of the disgruntled occupants alleged that the new home at 6 Mile provided by Government is unfit for human settlement.

It could be recalled that following the flood that took place in the Western Urban Area during the last raining season, thousands of victims temporarily settled at the National Stadium were provided a new settlement by Government at 6 Mile, Newton.

The frustrated victims alleged that the Government promised to give them stipend and other basic necessities to start new life, but to their greatest surprise, Government has reneged on those promises thereby making their lives very miserable and worthless.

They further alleged that President Dr. Ernest Bai Koroma visited them during the Easter holiday and promised to address their plight but to no avail.

One of the new settlers queried: “How do our authorities expect us to continue living in a settlement with poor sanitary condition, no medical and water facility, and no means to start business?”

The settler further alleged that most of the aged have taken to the streets as mendicants to eke out a living, adding that many have died of common illnesses for lack of medical facility.

Some of the physically challenged victims alleged that since they were forcefully transferred to 6 Mile which they described as an unfavourable environment, no official from the National Commission for Persons with Disability (NCPD) has ever visited them, let alone empathized with them.

They however praised the Executive Secretary of NCPD, Mr. Saa Lamin R. Kortequee for his concern for them, while the described the commission as “disable unfriendly.”

The physically challenged victims also praised the Chairman of One Family Organization, Mr. Eddie, who they say distributed some food and non-food items to them and encouraged pessimists to be patient as what happened to them was the will of God.

The irate physically challenged victims threatened to protest against Government for reneging on its promises unless it fulfils them.

The victims alleged that during the launch of the Flood Victims Account at the National Stadium by Vice President Dr. Victor Bockarie Foh, some business houses and companies donated building materials and cash for the erection of concrete houses at 6 Mile, but according to them, Government erected corrugated houses (pan body) for them instead of utilizing the donated construction materials and cash to build concrete houses.

They recalled when the erstwhile Outreach Coordinator in the Office of the Government’s Spokesman, Mr. Abdulai Bayraytay, who is now the Presidential Spokesman, told them in one of the news conferences held at the Communication Unit at the National Stadium that the new homes of the victims would be provided with all necessary facilities including electricity, pure drinking water, religious facilities, schools and many other useful structures.  They expressed surprise that those promises have never come to past.

They however called on Government, humanitarian organizations and philanthropists to come to their aid to end their suffering at 6 Mile especially when the raining season is fast approaching.