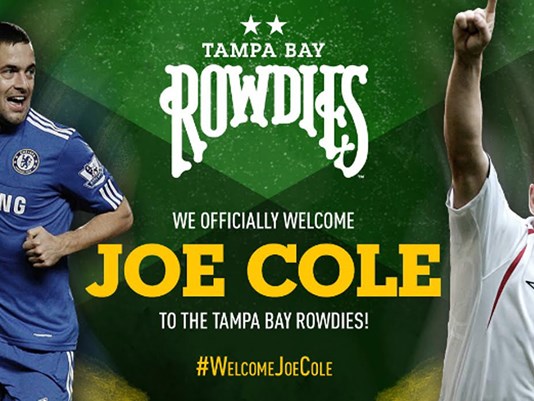 PETERSBURG, Fla. (May 4, 2016) — Three-time English Premier League champion Joe Cole has signed with the Tampa Bay Rowdies, pending ITC approval. His contract with the Rowdies runs through the end of the 2017 North American Soccer League Season, with a club option for 2018. Per club and league policy, no further contract details were disclosed.

“Joe is a fantastic player, a player I know well from my time in England,” said Rowdies Head Coach Stuart Campbell. “His experience not just on the field, but off it, is invaluable for us. One of the biggest things I took from my conversations with Joe was his love of the game and how badly he wants to win matches. The fire is burning inside him to win games and achieve great things with the Rowdies.”

“Cole has appeared in more World Cups than Gary Lineker, won more EPL Championships than Bryan Robson and more FA Cups than David Beckham,” added Rowdies Principal Owner Bill Edwards.  “It’s a career he can be proud of, and on top of that, he is a great guy.  This is a significant signing for the NASL and we are proud to have him as part of the Rowdies team.  We have mutual goals – to win championships and enjoy the game of soccer.  I look forward to introducing Joe and his family to the entire Tampa Bay community.”

Cole is the latest high-profile signing completed by an NASL club and brings a wealth of top-level experience to the Rowdies, his first team outside of Europe. In his stellar career, the 34-year old midfielder has won the FA Cup three times, the League Cup twice, the FA Community Shield twice and once finished as runner-up in the UEFA Champions League, in addition to his three Premier League titles as a member of Chelsea FC.

“It’s a very exciting time for me,” said midfielder Joe Cole. “I’ve always envisaged playing in the United States at some point in my life and this opportunity came up. My family and I came out to visit a few months ago and everyone was lovely, they really made us feel welcomed. I’m really excited to get started and I want to be part of a successful team. My desire to win football matches is still there, I’m not coming for an extended holiday. I want to win football matches and of course experience a new lifestyle with my family, but the priority for me is success on the pitch.”

Cole played this season with League One’s Coventry City in England, where he made 22 appearances, tallying six assists and two goals. Cole joined Coventry City initially on loan from Premier League side Aston Villa at the start of the season, but joined full-time in January.

Cole is most closely associated with Premier League giants Chelsea, where he played from 2003 to 2010, and West Ham United, where he began his professional career from 1998 to 2003 and the club which he rejoined for a season and a half in 2013. He has also played for Liverpool FC and Ligue 1 side LOSC Lille in his club career.

Born in Paddington, London, Cole has worn the Three Lions shirt of his national team on 56 occasions, including appearances in the 2002, 2006 and 2010 FIFA World Cups for England.

Ahead of his move stateside, Cole visited the Tampa Bay area with his family in February to take in a first-team training session and watch a match during the Tampa Bay Rowdies Suncoast Invitational. Cole again watched the Rowdies play while the club was on a preseason training trip in England, seeing the Rowdies draw 1-1 against Premier League club Stoke City FC in March.

Cole is joined in St. Petersburg by his wife, Carly, and their three children, Ruby (6), Harry (4) and newborn Max.