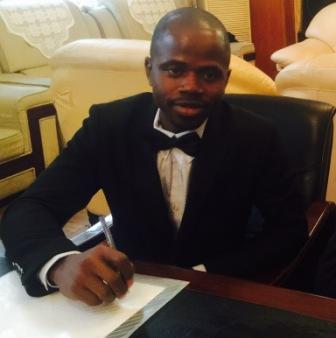 President of the Sierra Leone Students’ Union in the People’s Republic of China has called on his colleagues to do all they could and return home “after completing our respective studies…and contribute in transforming Sierra Leone…for there is no other place like home.”  (Photo:  Sesay calls on colleagues to give back to country)

Saidu Mohamed Sesay, a Masters Student in Public Administration at Wuhan University of Geosciences, spoke on 29th April in Wuhan City at an event hosted by the students’ body in commemoration of Sierra Leone’s 55th independence anniversary.

Sesay quoted the late Deng Xiaoping, Chinese leader from 1978 until his retirement in 1989, who once  said, “When our thousands of Chinese students abroad return home, you will see how China will transform itself.”

According to Sesay, Sierra Leone’s future is  in their hands and  their “collective role or effort in rebranding its image as students is of immense importance”, entreating all to be united and steadfast “ for the growth of the country irrespective of their different political ideologies, regional or tribal backgrounds.

“There is hope for the future of our country”, he said, and that hope, he disclosed “is bestowed in us as future leaders. And I am confident that in subsequent years, we as Sierra Leoneans will celebrate more than ever, numerous developmental successes.”

Since independence, Sesay said, the country has been encountering several challenges. Despite such challenges, Sierra Leone has in recent “years been described as one of the fastest growing economies.”

The country’s institutional and infrastructural developments including human resource capacity especially in the form of women empowerment, he said, are just few of the lot Sierra Leone can be boastful of achieving in recent past years.

He acknowledged there are  challenges the country is faced with but that their role in overcoming the existing challenges “is not only necessary but as well as crucially important. One of the tools we can use to actualize this is true patriotism.”

Patriotism, he said, should not only be limited to mere love for our country, but also being prudent and transparent and dedicated to the country’s development.

“Love for Sierra Leone, Sesay concluded, should commence from relating well with each other, “not only being constructive in our political criticisms but as well as proffering possible best solutions to  issues; emulating and subsequently implementing in Sierra Leone upon our return, best practices of the Chinese in transforming China into what it is today.”

China has been supporting Sierra Leone in a range of areas, not least in building her human resource capacity through the award of scholarships to deserving Sierra Leonean students, who form bulk  of the Sierra Leonean community in the Asian country.

How WoNES has promoted environment...