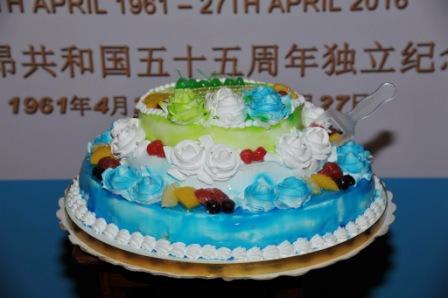 Sierra Leone’s Deputy/Acting Ambassador to China Madam Kumba Momoh, has on 27th April, called on her compatriots in the Asian country to consider their country’s resilience as a people of strong character with chapters in its long history worthy of celebration.

Addressing dozens of Sierra Leoneans and Chinese friends of the country, during a dinner reception in commemoration of the Sierra Leone’s 55th independence anniversary, Madam Momoh said, the country’s journey in the last 55 years has been one of great successes and achievements as her people have “stood together resiliently and survived a decade long civil conflict that rocked the fundamental values that once held them together.”

She commended the country for rising from the ashes of war, to becoming a beacon of growth and development in the sub-region, with international admiration, under the leadership of President Ernest Bai Koroma.

She also spoke of the challenging moments the country had, during the ebola period, but with a resolved mindset, the people demonstrated “their survival skills” and won the battle against the virus. Even for that, Momoh said, “…we have reason to celebrate.”

In his welcome statement, Head of Chancery/Minister Counsellor, Unisa Sahid Kamara remembered the heroic deeds of Sierra Leoneans, “deeds that made great changes in the lives of our people from the period of our founding fathers to modern day Sierra Leone”, naming people like Bai Bureh, Milton Margai, Siaka Stevens, etc, as having made   sacrifices for the general good in their own ways.

The greater majority of Sierra Leoneans today, he said, are young people, with capacity that should enhance our development strides, calling on all  “give to Sierra Leone what she deserves to grow -Patriotism, Service, Respect and Honor, Commitment and Love”, Kamara said.

Those who defend and maintain the...