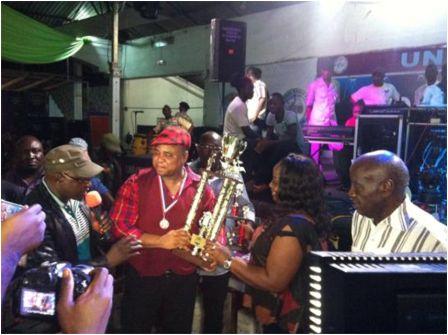 De Nazer (real name Alie Nasralla) scored 361 points, according to the judges, having being arbitrated on intro, dress code, crowd applause/entertainment, mixing, judges’ perception and outro among others.

Guest of honor, Minister of Lands Diana Konomanyi, presented the trophy to De Nazer and commended his disc jockey skills.

“You are a true professional,” said Konomanyi. “We are not surprised by the judges’ decision and we are very proud of you for coming all the way from Canada to celebrate the 55th Independence anniversary with us.”

“I feel so happy to win this,” said De Nazer, “but as I said earlier this is not a competition, this is a reunion for me. I contested with my very seniors and I doff my heart to them for their participation.”

De Nazer said disc jockeying is a profession but he merely plays for fun as the art has become a great passion. He dedicated his victory to his wife and two kids he left in Canada.

Furthermore, De Nazer presented a plaque to His Excellency President Ernest Bai Koroma, through the minister, recognizing his strides in good governance and overall leadership.

De Nazer, who played second on the list, carried his audience along like a good shepherd and his flock, from start to finish. Among this special flock was former Presidential Adviser, Hon. I.B. Kargbo.

“We had a very good time, and we want to commend all the contestants and the organizers,” said Hon. Kargbo, who was recently elected to parliament in a bye-election in Bombali District, Northern Sierra Leone.

De Nazer is a popular dj among the black and white communities in Canada. Until his relocation to Winnipeg in 2005, he was never known as a dj.

He thanked all the participants and the audience for making the event a success, and promised that next year’s edition would build on the achievements of the one just ended.