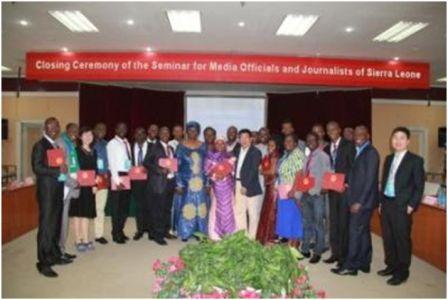 Deputy Chief of Mission/Acting Ambassador at Sierra Leone’s Embassy in the People’s Republic of China has entreated media practitioners to “continue to learn, innovate and above all, contribute to our country’s development.”

Madam Kumba Alice Momoh spoke on Monday, 25 April 2016, at the close of a Seminar on New Media for Media Officers /Practitioners from Sierra Leone, sponsored by the Chinese Ministry of Commerce, held at the Research and Training Institute of The State Administration Of Press, Publication, Radio, Film and Television (SAPPRFT), Beijing.

Madam Momoh said the media is an important actor in a country’s development process referring to its players,  whether in government service or mainstream as not only being “medium for the gathering and dissemination of timely and accurate information; but also pillars in the pursuit of democratic credentials, sustainable development and the guarantee of good governance.”

She noted that Sierra Leone has witnessed phenomenal growth in her media industry, both in terms of content, quality and quantity.  “We have seen a great rise in the number of media houses, both in broadcast as well as print journalism…” However, she urged,  that should not call for total celebration as there are a plethora of challenges the media is faced with, calling on practitioners to rise to the challenges.

Government, Madam Momoh said, continues to enjoy a cheerful relationship with the media, pointing to the appointment of Information Attachés and journalists even becoming ministers of government. She said such a decision was a novelty on the part of government.

At the levels of Ministries, Departments and Agencies (MDAs), the diplomat noted that Information Officers have also been major players in the governance process.

She added that government continues to provide the institutional framework for a media friendly environment, referencing the role of the Independent Media Commission (IMC); enactment of a law  guaranteeing access to public held information; with a free and pluralistic  press enjoyed in the country.

She therefore challenged participants to effectively use skills gained and knowledge acquired during the weeks of intensive training on New Media Development, taking into account the encouraging leap in Information, Communication and Technology (ICT) and with the advent of New Media.

She was optimistic the seminar had enhanced participants’ appreciation of China and “how the Chinese media has developed over the years to become a crucial component of governance and economic development.

Having achieved so much in protecting the image of China and Chinese heritage, Madam Momoh said “…the Chinese Media is now helping to promote bilateral media cooperation between the two countries”, calling on participants to go back home, and demonstrate the highest level of professionalism and use new skills and techniques.

She expressed appreciation to the Chinese Government, through the Ministry of Commerce and the Research and Training Institute of the State Administration of Press, Publication, Radio, Film and Television for organizing the seminar and expressed hope that it was “the first in many more to follow.”

In his statement, Austin Thomas, the group’s leader thanked the Chinese Government for the training opportunity and for contributing to the Ebola fight in Sierra Leone.   The three weeks’ training he said has helped them gain more knowledge and promised to go back home and impact on society through what they have learned.

Also speaking was Mr. Li Shao Xin, Party Secretary of the Research and Training Institute, SAPPRFT. He expressed gratitude to all for the cooperation, referring to the seminar as a great success. Media and journalism, he said, are developing in multiple forms.

The seminar, he said, helped to deepen the mutual understanding between the two countries and helped in making participants learn more about the successes China is experiencing due to the opening up process. “It has also expanded the China-Sierra Leone Media Cooperation”, he said.

Distribution of certificates and farewell banquet in honor of the twenty (20) participants climaxed the session, as the team departs in the morning hours of Tuesday 26 April, Beijing time.