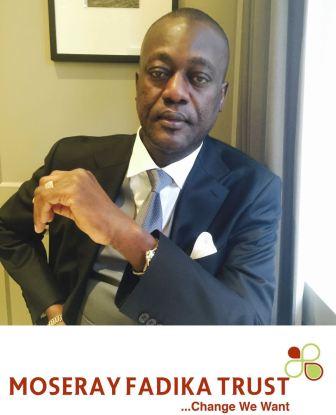 The summit brought together a wide range of world leaders and high profile people from across the 53 Commonwealth countries.

Ambassador Fadika was also presented with an international award for outstanding leadership and service to the people of Africa. President Obasanjo stressed that Ambassador Fadika will be a champion for the Commonwealth Africa Initiative, in promoting peace and development in the region.

In his role as Goodwill Ambassador and Business Ambassador for Trade, Investment, Business and Charitable Work of the Commonwealth Africa Initiative, Ambassador Fadika’s engagement will contribute significantly to attracting investment and mobilising resources towards the implementation of the United Nations Sustainable Development Goals (SDGs).

He will also engage in the work of eradicating extreme poverty for people in the Commonwealth by creating jobs, investing in education, health, housing and other sectors.

’’It is indeed a historic moment for me. I consider it a blessing to have this golden opportunity to champion the cause of Africa at regional and international level, promoting business as well as engaging and empowering poor people including women and youth, working alongside other eminent Commonwealth leaders. We must eradicate poverty. We are born poor, but we must not die poor,” said Ambassador Fadika.

Before the award ceremony, Ambassador Fadika delivered a keynote address on the theme “Shared Prosperity: Mutual Security” at the Commonwealth Africa Summit held at the prestigious Tag Hotel in Buckingham Gate in London, United Kingdom, from the 14th to 16th March 2016. The summit brought together government and business leaders from various parts of the Commonwealth to discuss various topics ranging from trade and investment, entrepreneurship, leadership, counterterrorism, security, and economic development in Africa.

In his keynote address, Ambassador Fadika said: “My country, Sierra Leone experienced a major crisis due to the impact of the Ebola epidemic, and the associated damage to communities and livelihoods. The economy was hit the hardest, with business closures and rising unemployment further devastating a country that had not too long emerged from a decade of civil conflict.

Our business was seriously affected. As co-founder and Executive Chairman, I was greatly involved in the work of African Minerals Limited, a minerals exploration, development and mining company with significant interests in Sierra Leone, which was forced into administration due to the Ebola crisis. We worked very hard to rescue the mining sector and brought in new investments. We survived! Now we have Shandong Steel SL Ltd., Pan African Minerals Ltd. and we are working across 16 countries in Africa. We appreciate the support provided and are grateful to the Commonwealth, the international community and my fellow Sierra Leoneans in tackling the Ebola virus. Together, we defeated Ebola.”

Speaking at the summit, Ambassador Fadika emphasised his commitment to uniting and empowering people across Africa and to being a champion to advance business, trade and investment in Africa and across the Commonwealth. He underlined the importance of eradicating extreme poverty and helping poor people work their way out of poverty.

The summit began with a wreath laying ceremony at the Memorial Gate where Ambassador Fadika, for the first time in history laid a wreath on behalf of Sierra Leone, in honour of the dead of the 2nd World War.

The Queen’s annual Commonwealth Day message formed part of the programme at the Westminster Abbey and in it, she said: “Today, and in the year ahead, the theme ‘An Inclusive Commonwealth’ is an inspiration for us all. Let us give it practical effect by supporting those in need and those who feel excluded in all walks of life. By doing so, we will continue to build a truly representative Commonwealth community.”

Ambassador Fadika came from a humble background: he was born in poverty and struggled to pay his school fees. Despite these difficulties and challenges, Ambassador Fadika never lost hope and continued in his efforts to seek a better life. He graduated from university and went on to become a magnate in the business sector.   Ambassador Fadika is today one of the leading entrepreneurs in Africa and he is regarded as Africa’s success story.

Ambassador Fadika is the Vice Chairman of Shandong Steel SL Ltd and Executive Director of Pan Africa Minerals Ltd, with a cumulative investment portfolio of over 3.1 billion United States Dollars in Africa. With promising investments in iron ore, oil and gas and related resources in nine West African countries among them Sierra Leone, Ghana, Ivory Coast, The Gambia, Senegal, Burkina Faso, Liberia and Niger, Ambassador Fadika has helped provide jobs for over 10,000 youths in the region. Ambassador Fadika has also set up the Moseray Fadika Trust, providing jobs for thousands of young people, offering educational scholarships, building schools, providing housing support etc. Ambassador Fadika is committed to promoting better governance in Africa and strengthening the capacities of people and communities to achieve a fairer and a more peaceful world.

Say with Sierra Express Media, for your trusted place in news!