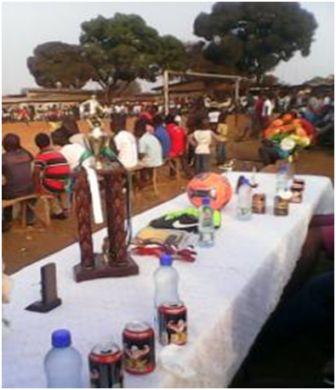 The Ansumana Usman Koroma-AUK Trophy has just ended in the East end of Freetown bringing more than five hundred youth from different constituencies within a unified atmosphere, allowing these youth to showcase their individual talents and aspirations for a sustainable community development.   (The grand finale for the AUK Trophy at the Low-cost football field)

This trophy was organized in recognition of one of the most celebrated Sierra Leoneans currently living in Tasmania, Australia. The football competition, according to the organizers, was to honour Ansumana Usman Koroma aka AUK, who is a Policy Analyst at the Department of Premier and Cabinet for the tremendous job that he is doing for youth and disadvantaged communities across Sierra Leone. It will be recalled that, during the Ebola outbreak in Sierra Leone, AUK coordinated the “Salone Ebola Action Group in Australia” (SEAGA) and donated four forty feet containers of medical supplies and significant consignment of humanitarian relief to communities that were severely affected by the scourge.

When contacted in Australia about the football tournament, Mr. Koroma passionately expressed his determination to help youth and people from disadvantaged communities through the delivery of needs-driven activities. Mr. Koroma added that it is an honour for him to complement the towering efforts of His Excellency Dr. Ernest Bai Koroma in transforming the lives of Sierra Leoneans.

Chairman of the organizing Committee, Mr. Eric Bangura thanked and appreciated the “Ansumatik Network” for supporting and ensuring the successful organisation of the football competition. He added that this is the most popular competition ever organized in the East end of Freetown apart from the National Premier League usually organized by the Sierra Football Association (SLFA).

Speaking to a group of journalists at the AUK Secretariat along Main Motor Road in Congo Cross, the country’s National Coordinator of the renowned Ansumatik Network, Mr. Mohamed Daffae said the Network was established by dedicated, thoughtful and action-oriented Sierra Leoneans who are determined in propagating the dreams and aspirations of Ansumana Usman Koroma. He said the Network has functional offices in all the 149 Chiefdoms and the 14 Districts in the country. Mr. Daffae added that the Network was formed in honour of the visionary leadership and philanthropic gestures of Mr. Koroma.

Supporters of the Ansumatik Network at the low-cost football field

Mr. Daffae noted that, after sounding the views of Sierra Leoneans and extensively looking at the humble character and personality traits of Mr. Koroma, they have now come to the conclusion that “Mr. Koroma was not only born great, but has fought hard to achieve greatness” which is why he is still flying the country’s flag in other continents to demonstrate his passion and sincerity in transforming Sierra Leone for sustainable development.

He said the just concluded AUK football competition was to help bring a sense of unity and to establish camaraderie among youth across the country. He said at the end of the competition, some players will become lifelong friends and more unified irrespective of the differences in religious, tribal and regional affiliations.

By AUK Media and Communications Team

What does it take to beat drug-res...

Women, Governance and a Presidenti...