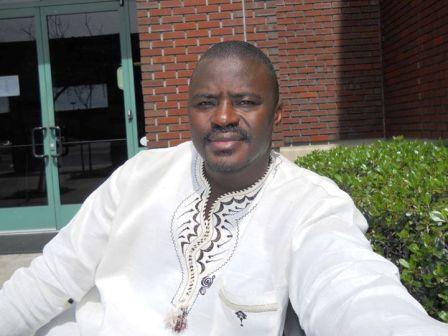 Call it Appalling; Pathetic and Contentious (APC) are few adjectives one may be tempted to use in describing recent happenings in our beloved country, called Sierra Leone.  Sierra Leoneans are used to facing shocks in their lives, especially when a new leader comes into power. For instance, during the 1992 National Provisional Ruling Council’s entrance into the political foray, the people danced, celebrated and waited with berated anticipation that the final dawn of redemption and path to paradise is here. But alas, it marked another era of frustration, trepidation and dashed hopes.  (Photo: Ibrahim Sourie Mansaray, author)

Fast forward political gimmicks these days and see how rapidly my country has improved (sarcasm) in terms of ministers fighting in public places (Stadium hostel and in the office of the Children and Gender Affairs office),  using invectives in their offices, (Moijeh Kai and his deputy, Atila respectively), the  controversial ousting of the democratically elected Vice President (Sam Sumana), the recent suspension of the Koidu Town Council Mayor (Saa Lamina), the unoccupied ministries in the cabinet, as if there are no competent people to fill these positions. The list is endless……..These and more have dampened the spirits of die hard APC supporters  about either  the political acumen of their Leader, Fountain, Commander and ……is not well focused or there is something wrong with the party and its people.  Whilst people of other countries such as Nigeria, Tanzania and Senegal glamorize their leaders for their marvelous jobs done in the interest of their kith and kin, Sierra Leone and Sierra Leoneans are knee jerked in despair, despondency and outright loss of hope.

Sierra Leoneans are pitiful, as  they recalled in 2007 when they abandoned their household chores to exercise their constitutional rights in voting for a president whose character and vision was untested in the annals of politics. People never doubted the qualities of Ernest Koroma nor did the people question his ruling skills. It is the qualities the country possesses of handing power to people based on the stories propelled by fans and supporters of the parties. It gained prominence in the SLPP era when the country voted Tejan Kabbah on the platform of being a former Diplomat at the United Nations.

But is President Kororma really paying back the people of Sierra Leone their dues? The economy is not in good shape, the educational system is still not to boast of, the infrastructural development that gripped the minds of people is now stalled, there is pervading display of corruption and embezzlement stories all over the country. There are competent people to fill positions waiting while the country keeps on being governed by acting personnel. What has gone wrong with our president we used to clamor for? Where has the mojo gone?  Where has all the prospects for posterity   and prosperity gone?

Take for instance the political climate in Tanzania and see the role played by the new president: Magufuli   is the man at the helm of things in the country. He is an action oriented leader, known for his integrity, transparency, and  sense of justice. Magufuli  was  appointed as Deputy Minister of Works, and five years later, he won his first parliamentary seat unopposed where he was promoted to full Minister. He earned high praise for working tirelessly to supervise the construction of a road network in major parts of the country, which resulted in a connected, efficient system. At the same time, he fought a status quo of corruption, ensuring that public servants followed applicable laws. He ordered the demolition of houses wrongly constructed in road reserves, went head to head with rogue contractors, and restored discipline and fairness with the road construction sector.

To earn his party’s presidential ticket in 2015, Magufuli defeated 37 aspirants from his party. Today, he is not only president with a difference, but has already started setting the pace as one of the best presidents in Africa. In less than six months in office, Magufuli has continued to burnish his no-nonsense reputation for asceticism and getting things done. He organized a cleaning exercise that swept the streets of State House to Independence Avenue. He cancelled the Independence Day celebration on the pretext that it is waste of money. To further his promise to cut wastage, he has banned all public officials from travelling on first class trips to overseas countries for conferences and seminars. He cited it as an economic malaise as officials at the embassy in overseas are empowered to attend the seminars. Magufuli has embarked on a remorseless purge of corruption, an issue that has plagued the East African state. He is now called ‘The Bulldozer” of the African Continent. This is what leadership is all about.

If you consider Tanzania as a far- fetched country with novelty stories about economic prosperity, then take a look around a notorious country for corruption now taking the center stage of economic born-again status in the world; Nigeria. Since Muhammad Buhari came to the presidency, there has been a complete u-turn of events in the country.  President Buhari has invigorated the fight against Boko Haram by rallying a regional and global front against the terror group. Today, the United States has pledged $5 million to the fight against Boko Haram, in addition to other material support. On his fight against corruption, Buhari has nailed top politicians and rogues behind bars. The three arms of government are not only operating, but functioning with little or no interference from the executive arm of government.  Quite recently in an interview, Buhari informed his audience that he is looking for credible and corrupt free judges to speedy up corrupt cases.  This is quite impressive, considering the backdrop of powerful and wealthy personalities controlling the resources of the state. This is what leadership is all about.

Back to my little country called Sierra Leone where everything these days stands turpsy – turvy. People are now judged on the colors they wear to work and the accomplice they mingle with. Even in the days of the inept J.S Momoh, politicians don’t fight in public places , let alone to water down national secrets.

As the country goes through its difficult times, weary and die-hard supporters are expressing their fears about the future of their party. In the Philadelphia axis in the United States where a popular center of youths assemble to discuss national politics at a place called King Jimmy, a renowned  supporter of APC called Kabba  Kamara, popularly called Kabba APC has stoutly expressed his utter frustration at the affairs of his party on his facebook timeline. Kabba may not be alone in his tirade as the issue of negligence, sabotage and political servitude now seems to occupy the center stage of Sierra Leone’s politics. In another vein, a disgruntled native of Dodo in Kenema Distric , Gombie Musa-Tonyayia, attributes the awkward happenings in the country as regretful where politicians only think of themselves and not the country.

As the election draws closer, the people of Sierra Leone will be in their millions waking up in the morning to cast their votes again, in an era that would usher in another leader with high hopes. We pray that God gives the people the right leader that will keep the woes of the people in mind.

A statement by the chairlady of Wo...