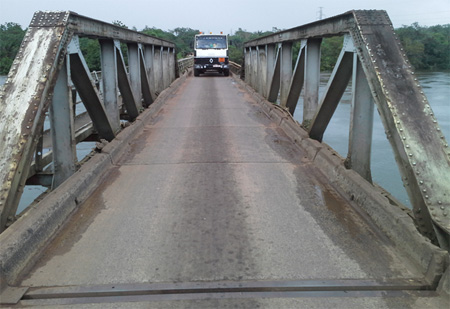 The Minister of Finance and Economic Development (MoFED) Dr. Kalfala Marah in late December last year described President Dr. Ernest Bai Koroma as the “champion of development” since Sierra Leone attained her independence in April 1961. The quintessential gentleman made the statement during the turning of the sod for the construction of Bintumani Bridge in Koinadugu District where the Finance Minister hails from. (Photo credit Awareness Times)

The Minister of Finance was absolutely right to have crowned President Dr. Ernest Bai Koroma as champion of development in Sierra Leone given the massive infrastructure development his Government has embarked upon across the country over the last eight years. Even Kailahun District, which used to have one of the worst roads in the country, could now boast of the best highway in the country though phase two of the project – from Pendembu in the Upper Bambara Chiefdom to Koindu in the Kissi Teng Chiefdom which is about 54 miles – has not yet begun. The number of road projects under the Koroma administration is so massive that many have argued that they would not be completed before the President would leave office in 2018.

But ironically, though, many people from the Northern Region are disappointed that while the Government is rolling out development programmes across the country, it has woefully failed to prioritize the construction of the moribund and dilapidated Gbere Bridge, the gateway to the Northern Region, which is often used by our President and countless Government officials when travelling to their Northern homes. Has it ever dawned on the President and other Northerners in Government that failing to construct the Gbere Bridge before the next elections could dent the image of the APC Government, especially when most of the decision-makers are users of that obsolete colonial bridge?

One of the leading tabloids reported yesterday that Gbere Bridge has become a death trap. According to the report, the 50-meter-long bridge that was constructed during the colonial era continues to pose serious threat to road users as the iron bars on either side of the narrow bridge have disappeared, leaving road users dangerously exposed to accidents. Because of the nakedness of the bridge, road users are always terrified when crossing it and many fatal accidents have occurred there over the years.

According to statistics as stated by the report, in 2015 alone over fifteen people died in separate accidents when their vehicles plunged into the river beneath the antiquated bridge. The latest was in December towards the Christmas, when a whole Sierra Leonean family from Australia and other family members who had gone to Lungi Airport to receive their siblings got in a fatal accident at Gbere Bridge. The Jeep they were using plunged into the river and all of them perished but one, a female.

Such fatal accidents will recur for years to come unless Government makes its construction a matter of priority, especially when the Gbere Bridge is along the trunk road to the Northern Region, Guinea and Kono District which are very crucial to our economic development.

If the Government has reached an agreement with the China Railway Seventh Group (SL) Limited for the widening to a 4-lane and tolling of the Wellington-Masiaka Highway with an estimated cost of US$153 million, the Government might as well prevail on the Chinese company to source another loan for the construction of Gbere Bridge to modern standard to avert those fatal accidents. In other words, Government should prioritize the construction of that bridge because it has outstayed its usefulness and our brothers and sisters who had perished in that bridge would have been with us by now if previous Governments and the current one had prioritized its construction prior to those fatal accidents.

Being the champion of development in Mama Salone, therefore, President Dr. Ernest Bai Koroma needs to prioritize the construction of the Gbere Bridge so that he would leave it as one of his flagship legacies that Sierra Leoneans would be very proud of.

ACC: lawyer for assassin walks out...