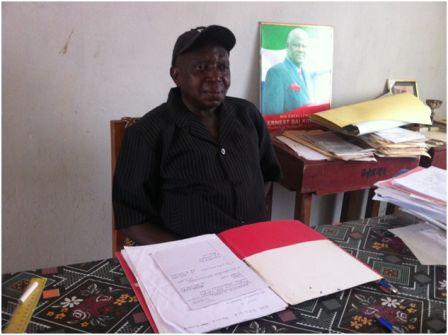 Pupils of Koyeima Government Secondary School in the Valunia Chiefdom, Bo District, recently demonstrated against the school administration during which they set ablaze the residence of the Acting Principal, Mr. Samuel Ndeleh James (in photo).

The pupils also reportedly set part of the school compound ablaze thereby bringing all learning activities to a standstill as they chant, ‘If our demands are not met, Principal James must go!”

Explaining their ordeals to a cross-section of media practitioners, the Senior Prefect of Koyeima Government Secondary School, Michael Ibrahim Kpandeveh, expressed their frustrations over the poor living conditions on campus as a result of numerous challenges the school administration is yet to overcome.

The Senior Prefect disclosed that the demonstration was planned since the days of Principal James Katta, who he said passed away in November, 2015, but said some Koyeima old boys advised them to put their plan on hold until they were ready to give them their support.

Michael Ibrahim Kpandeveh added that the demonstration was fully supported by old boys and advised them to be very robust in their decisions and actions.
He lamented that despite Koyeima Government Secondary School was established as a feeder school to Government Secondary School Bo, neither Government has embarked on any major rehabilitation of the school nor has the old boys in higher positions of trust in the country come to the aid of their Alma Mater which he described as frustrating.

The Senior Prefect described most of the school structures as dilapidated colonial buildings serving as hideouts for wild animals like snakes.

While lamenting the inactions and coolness on campus, Michael attributed the poor academic performance of the school to the lack of modernized library, equipped laboratory, computer facility, inadequate furniture and many other challenges which Government and old boys have done nothing to tackle them.

Speaking to the Acting Principal, Samuel Ndeleh James, he confessed that the school lacks some basic standards to qualify it as a real Government own institution.

He said Government is making frantic effort to upgrade the status of the school, but blamed the old boys for not paying much attention to the school which he described as a neglect of their own property.

Mr. James said instead of the old boys paying lip service to their school, they should realize that they have a vital role in the day-to-day administration of the school.

He disclosed that Government contributes 70% to the running of the school while the remaining 30% should be catered for by the old boys.

The Ag. Principal therefore appealed to all the old boys to come onboard strongly in a bid to upgrade the standard and status of their school.
He explained that when he took over the school as Ag. Principal in January this year, he went the extra mile to get additional qualified teachers, adding that he also approached some philanthropists and stakeholders of the community for help but got little support from them.

Mr. James also commented on the poor security situation in Koyeima which he said has resulted to the invasion of their premises by thieves whom he said had been succeeding in carting away their properties worth millions of Leones.

On accommodation, the Ag. Principal said some of the reasons why many qualified teachers are often reluctant to move to the school are the deplorable nature of the school and the dilapidated staff quarters which he said are nothing to write home about.

Mr. James lamented that most qualified teachers would prefer schools with better facilities and opportunities than his school.

Meanwhile, the Ag. Principal has appealed to humanitarian organizations and well-meaning Sierra Leoneans and non-citizens to come to their aid so that the school will regain its exuberant past.
However, efforts by our Southern Correspondent to contact the Head of Old Boys for comments proved futile though investigation still continues into the role played by the old boys in the school demonstration.

By Hassan Juana Koroma in Bo

Why vilifying SLRSA boss for her u...