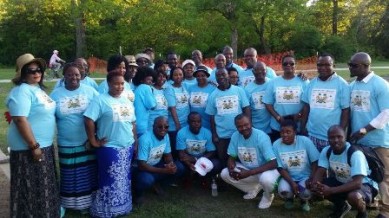 Dallas, Texas: January 4, 2016. Ladies and gentlemen, three distinguished individuals are being awarded for their outstanding contributions for their socio-cultural activities in the Dallas metroplex and their engagement in our country’s social political and economic milieu. The media and communication center for Texas deems it necessary to recognize these individuals for their significant impact here in our city and back home, as Texas Bureau Chief.  (Photo: Association of Sierra Leonean Organizations in Texas)

As the community continues to grow in Texas it is apparent that every year we have to make it a point of duty to identify specific contributions of people who regularly speak with wisdom and make vital contributions to Dallas and Sierra Leone unfolding issues.

The awards focused on individuals that contributed to a particular event, a particular goal, and overall accomplishment that is worthy to be reckon with in terms of our cultural values. Values, such as generosity with their time and talents, and how they brought light and life to so many incredible community endeavors helping towards our socio-cultural values. The Texas Chief believes that recognizing these particular people for their valuable contributions is an essential part of the annual event moving forward in the Dallas metroplex.

Honorary Consul General at Interfaith prayer for the down of Ebola

Be aware that the contribution of Diasporas to our national development defines our country’s progress is a significant strand in our post war and post Ebola crisis, hence it is vital to acknowledge individuals who took upon themselves to address the nature of escalating problems and develop strategic ways to make contributions. Many Sierra Leoneans responded to the Ebola outbreak but, few however, in Texas remarkably answered the calls to action and demonstrated their devoted love for their country.

Speaking with a united voice, few community members headed by Mr. Reuben Ndomahina, came together and established an organization called, Association of Sierra Leonean Organizations in Texas (ASLOT). This organization goal is to unite all the organizations, clubs and political groups to see the need for a united front and work for a common good. In its executions, the ASLOT pursued its first test, the Ebola epidemic which prompted members to action under the charismatic leader and vice president of the organization. Here are the heroes of 2015.

The first person to be recognized by this media house is the newly appointed Honorary Consul General, Mr. Patrick Jackson. Throughout the year, Mr. Jackson unyielding services to the community and Sierra Leone, has championed the cause of the people by participating in any goodwill activity that is fostering the development of our country. He participated in two Ebola summits last year in Texas. He was among the few Sierra Leoneans who participated fully on the post Ebola strategy summit sponsored by Restore Hope in collaboration with ASLOT and other non-profit organizations. Restore Hope is non-governmental organization (NGO) in Texas is operating heavily to bring hope and sustain health to the nation of Sierra Leone. Honorary Consul Jackson always volunteers to help Restore Hope in diverse ways including collecting items, packing and shipment processes during the Ebola crisis. He has demonstrated a model of emotional attachment to his country during crisis. Before the Ebola strategy summit, Honorary Consul Jackson actually started his civic virtue and dedication in a global Ebola conference that was organized by a Sierra Leonean organization called Sancofa Infrastructural. Mr. Jackson was also active in all of the community funeral/memorial services. He attended almost all funerals that made known publicly to the community.

The second media award also goes to ASLOT. Inside ASLOT, there is a medical doctor, Dr. Thomas Sawyerr whose deeds speaks far better than I can describe him here. His main function last year was to inform fortnightly the community with an update of the Ebola crisis in West Africa and the overall health problems in our country. During the biweekly meetins, Dr. Sawyer has never been late or absent in any of those meetings that discussed ways and means of helping our people back home.   Dr. Sawyerr is a friend of late Dr. Salia, the man who sacrifices his life to save many Sierra Leoneans from the carnage caused by Ebola disease. He has been demonstrating a warm-hearted humanity and deep concern for the healthcare in our country by unceasing service and devotion to a myriad of health causes. Dr. Sawyerr can take pride in the fact that his faithful performance of vital duty as a medical doctor has contributed so much in the success of ASLOT in the fight against the Ebola. He participated in the Ebola conference, and has participated in last year’s two interfaith prayers for our country. The media award for healthcare goes to Dr. Thomas Sawyerr

The Texas Bureau Chief is also honoring an inspiring community member who has created a positive change in our community by bringing us together to live as one Sierra Leoneans in Texas. He is Mr. Joe Pokawa having created a community network-WhatsApp forum called DFW Sierra Leone matters. In spite of series of political turmoil, the Ebola crisis and other issues in our country, the Sierra Leone community in Texas still collaborates and exchanges ideas through the DFW Sierra Leone matters’ forum. It is a completely independent forum that provides every member of the community the opportunity to express his/her freedom of speech.

Diasporas who had returned home and have been members of the DFW community before are eligible to join this forum when they come for holiday. The Director and Second in Command of Attitudinal and Behavioral Change (ABC) Ms. Nanette Thomas once be a community leader came to visit with us in October was enthusiastic join the DFW Sierra Leone matters forum. She speaks loud and clear, giving us the latest news of our country. Added to his values, Mr. Pokowa has rented a hall for community functions and that hall can accommodate up to 300 people. Many people I interviewed also commended the gentleman’s contribution to their finances. He was filling income tax for almost 40% of community members last year and charges a very low price for the job. He participated in almost all funeral service that the community had. The winner for 2015 community award goes to, Mr. Joe Pokawa.

Ladies and gentlemen, there are many ways Sierra Leoneans can do outside your country to make a positive changes in our country’s social, political and economic development like the three awardees. Many people living in the Diaspora are exceedingly well equipped and well talented to do more than the three men who underscore this media awards. Honorary Consul Jackson, Dr. Thomas Sawyer, and Mr. Joe Pokawa, I want to do my bit to give you a good, big, hearty New Year and wish you well.

Share With:
Tags
Heroes of the Year 2015
Previous Article