Why is Hon. Kello deceiving the people? 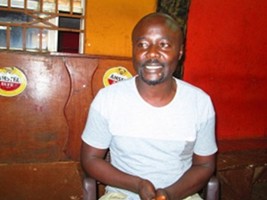 Why is Hon. Kello deceiving the people?

Constituency 098 in Wellington in the East end of Freetown was formerly represented by Hon. Alimamy Coleson Turay from 2007 to 2012 when he eventually lost the ruling All Peoples Congress (APC) symbol to the current Member of Parliament, Hon. Karifala Sheku Conteh aka Kello, who was an employee of the now defunct Comium Telecommunications Company.

Prior to the awarding of the party symbol, many constituents had complained that Hon. Alimamy Coleson Turay was not development oriented and that he should be replaced with someone with the penchant for development.

He faced a lot of criticisms from detractors in Constituency 098 and the APC caucus. Hon. Alimamy Coleson Turay was finally denied the party symbol to his disbelief but had to swallow the bitter pill for the love of his party.

The lot fell on Hon. Karifala Sheku Conteh, who many constituents though had great potential to deliver on his election promises, but sincerely speaking, the constituents have mixed feelings about the young Member of Parliament whose performance has been questioned in several quarters.

Apart from his rambunctious remarks in radio discussion programmes and his contributions to debates in Parliament, his representation of Constituency 098 hasn’t made the difference as many had thought.

Though Hon. Karifala Sheku Conteh may claim to have implemented some community development projects in his constituency, his failure to recognize those that funded the projects so that he alone would take credit for them is tantamount to deceitfulness.

For those who are not au fait with constituency politics, the operations of the Environment Protection Agency, Sierra Leone (EPASL) have greatly enhanced development programmes for our Members of Parliament especially those that have companies operating in their constituencies.

The EPASL was established by the Government of Sierra Leone and has the mandate to authorize all companies to make public disclosures with regards their contributions to development in the areas they operate.

For example, we have many companies at the Wellington Industrial Estate in Freetown and all of them have made their public disclosures as to which development programmes they should fund annually apart from their corporate social responsibilities.

As a result of this new Government policy, Constituencies 096, 097 and 098 have embarked on many community development projects being funded by companies at the Wellington Industrial Estate, including the Sierra Leone Brewery Limited (SLBL), the National Confectionary Company (NATCO), the G. Shankerdas and Sons Limited, the M.R. Distilleries, Victory Enterprises, to name a few.

With such financial assistance these companies are giving to the three Members of Parliament for Constituencies 096, 097 and 098, you will be appalled that Hon. Karifala Sheku Conteh does not seem to acknowledge their role of funding the development projects he has implemented over the last three years.

Hon. Kello also replicated the same pranks in the rehabilitation of the restroom of a community primary school at Upper Mellon Street in Wellington. He had the temerity to claim that he constructed the toilet instead of rehabilitating it.

People in that community can testify that the former structures of that school, including the toilet which the MP claimed to have constructed, were re-built by an international non-Governmental organization, Action Aid, years before Hon. Kello became a Parliamentarian.

I even had to accuse the contractor of been part of the grand plan by the MP to deceive the public because that so-called contractor was a member of the Community Development Committee (CDC) that monitored Action Aid during the re-building of that community school. But since the contractor was contracted by Hon. Kello to rehabilitate the toilet of the school, he did not have the guts to advise the MP not to order the writing on the rehabilitated restroom “Constructed by Hon. Karifala Sheku Conteh (Hon. Kello).”

Therefore, my humble advice to Hon. Kello is to stop deceiving the public for political gains because we know the backgrounds to all the community development projects he has implemented in Constituency 098.

As a representative of the people, it will serve him right to be very honest by crediting the companies that have financed the projects he has successfully implemented. Crediting the companies for their contributions to community development projects can further motivate them to contribute more to community development projects.

Hon. Kello should also learn from his counterpart in Constituency 097, Hon. Ibrahim Knox Sankoh, who has never mixed matters in crediting companies that have funded most of the projects he has implemented in his constituency. He is an upright Parliamentarian who has never told lies to his constituents about the community development projects he has implemented to alleviate their plight. That is what the general public expects from any responsible Member of Parliament.