Ahead of Bye Election on Saturday Moseray Fadika to storm Kono 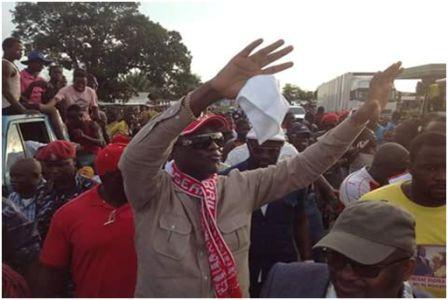 Ahead of Bye Election on Saturday Moseray Fadika to storm Kono

Now that the battle line has been drawn between the ruling All People’s Congress (APC) and the main opposition Sierra Leone Peoples Party (SLPP) in Kono District over the Parliamentary bye-election in Constituency 025, the leading flag-bearer aspirant of the governing party, Mr. Moseray Fadika, has in his wisdom, decided to storm the district to ensure victory for their candidate, Sierra Express Media can authoritatively reveal.

The Parliamentary bye-election in Constituency 025 will be conducted by the National Electoral Commission (NEC) on Saturday, 19th December, 2015, but according to an unconfirmed source in the APC, tension mounted in the constituency on Tuesday and Wednesday when supporters of the SLPP allegedly attacked APC supporters during their campaign rally.

An APC stalwart representing the party in the constituency for the Parliamentary bye-election claimed on Tuesday that the SLPP attacked them.

According to Minister Karamoh Kabba of the Public and Political Affairs Ministry, the SLPP thugs took advantage of the factional brouhahas in their party to attack Police positions and structures of known APC supporters and the campaign headquarters of the APC.

The Minister claimed that houses were vandalized and that, at least, a vehicle was touched, adding that he was under siege when the SLPP went on the rampage.

An SLPP stalwart who declined to identify himself on phone, dismissed the claims made by Minister Karamoh Kabbah as untrue.

The stalwart’s version of the incident in that constituency was that some APC supporters attacked the former SLPP Presidential candidate, Retired Brigadier Julius Maada Bio, when he arrived in the constituency at about 6:30pm to campaign for the SLPP parliamentary candidate.

He also claimed that Maada Bio had to run for cover when the APC supporters started throwing stones and other offensive weapons in protest of his attempt to campaign after 6:30pm.

This latest development has compelled Moseray Fadika to visit the district to persuade voters to see reason to vote overwhelmingly for their candidate as they did for the late Hon. Augustine Bockarie Torto in the November 2012 parliamentary election, whose death this year resulted to the pending bye-election.

The leading APC flag-bearer candidate is not a stranger in Kono District where he invested in a mining company that employed hundreds of Sierra Leoneans mainly Kono indigenes.

Moseray Fadika is a household name in Kono and his visit to the district headquarters, Koidu city a few months ago attracted thousands of young people and elders who lined the streets to support his intention of becoming the next presidential candidate of the APC in the 2018 elections.

According to sources in Kono, Moseray Fadika wields a lot of influence in the district which he could use to garner the needed support for the APC candidate, noting that the investor, politician and socialite was very generous to people, especially the needy, when he was running a mining company there during the SLPP regime.

Though many Kono indigenes are aggrieved that the APC expelled their brother erstwhile Vice President Samuel Sam Sumana and later removed him from office, political analysts say the visit of Moseray Fadika to Kono ahead of the parliamentary bye-election would be a very big booster for the ruling party as most people in the district hold him in high esteem and would listen to him with kin interest.

The flag-bearer aspirant is expected to travel with a large entourage of party stalwarts and some members of the APC National Youth League to campaign for their candidate.

“I’ll do everything in my power to ensure that we retain our seat in Constituency 25 to prove to the opposition that we are still on top of situation,” Moseray Fadika was quoted as saying.