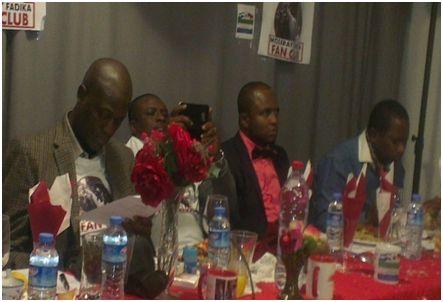 Popular businessman and philanthropist, Mr. Moseray Fadika, known by his numerous fans as Super, who is currently on a meet-the-people tour to Europe, is reported to have received a hero’s welcome in the United States of America, Canada, Germany and other parts of Europe, where reports say he is meeting with mostly All Peoples Congress (APC) members to consult with them on the choice of flag bearer for the party for the 2018 elections.

The reports further state that he has so impressed Sierra Leoneans wherever he has met them in the Diaspora that even most die hearted opposition Sierra Leone Peoples  Party (SLPP) members have declared for the ruling APC.

It is further reported that the turnout of Sierra Leoneans at meetings organized for him in these places were attended by Sierra Leoneans from all tribes, religions, regions and political affiliations.

Observers say that the meteoric rise of Super to the level that people now want him to vie for the Presidency of this country did not come about inadvertently but by virtue of his fondness for all Sierra Leoneans, especially children, youths, the aged and the physically challenged.

In Germany he did not mince his words when he told his fans: “I am pleased to be with you all on this consultative tour, and I must confess that you people have now enthused me to push forward. Your various gestures are a command to me in this regard.”

Super is said to be on his way to China after Germany, to meet with Sierra Leoneans there and like in the other places he has visited, consult them in the leadership of the APC and listen to their opinions.

As we were going to press late last night an executive official of the Moseray Fadika Movement told this paper that they are planning a big welcome back home for him over the weekend.