Director of Diaspora Affairs in Ethiopia for study tour 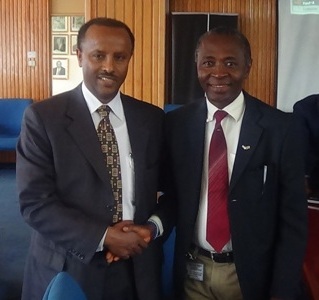 Director of Diaspora Affairs in Ethiopia for study tour

Mr. Kallay Musa Conteh, Director of Diaspora Affairs in the Office of the President who is on a study tour in Ethiopia on Friday 20th November, 2015 held a meeting with his Ethiopian counterpart, the Acting Director General of Diaspora Engagement Affairs, Mr. Teferi Melesse.  (Photo: Mr. Conteh (R) and Mr. Teferi Melesse)

The objective of the study tour is to understudy how Ethiopia’s Diaspora engagement works and to replicate same in Sierra Leone in a bid to build the capacity of the Directorate of the office of the Diaspora Affairs through Diaspora resource mobilization by way of experience sharing.

He said that as a result of migration brain drain has become a serious problem for his country and noted that there are more Ethiopian doctors in Europe and North America put together than in Ethiopia.

“Today, migration from Ethiopia continues with both skilled and unskilled migrants, but it is now mainly of economic migration,” he said.

He pointed out that his office has instituted a scheme for skilled Ethiopians in the Diaspora to temporarily return to the country for a period of six months to provide support to line Ministries and public institutions.

Responding, Mr. Kallay Musa Conteh, Director of Diaspora Affairs said that the study tour would enable him to commence the process of strategically engaging Sierra Leoneans in the Diaspora.

Mr. Conteh stated that upon completion of his study tour he would be in a better footing to harness the potential of Sierra Leoneans working abroad.

His office, he said, also serves as an out sourcing agency encouraging the Sierra Leonean Diaspora to return home and contribute meaningfully to the socio-economic development of the country.

Earlier, Mr. Conteh paid a courtesy call on the African Union Commissioner for Social Affairs, Dr. Mustapha Kaloko and updated him about the purpose of his engagement in Ethiopia.