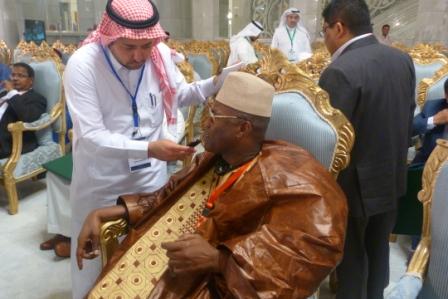 Sierra Leone’s Ambassador to the Kingdom of Saudi Arabia has hailed the resilience of His Excellency the President, Dr. Ernest Bai Koroma to take on Ebola fight head-on, which saw the declaration of Sierra Leone as an Ebola-free country on Saturday 7th November, 2015, by the World Health Organization (WHO) after forty-two days of zero case of Ebola infection.

Speaking to Reporters in the Holy city of Mecca where he is currently on the invitation of the Government of the Custodian of the Two Holy Mosques for the ceremonial washing of Islam’s most sacred house, the “Ka’aba”, Ambassador Alhaji Mohamed Sillah Kargbo congratulated all those who played a pivotal role in diverse ways to see the country free from the deadly virus.

The Ambassador who was speaking shortly after WHO declared Sierra Leone Ebola-free thanks the Almighty Allah for making Sierra Leone free from the virus and commended the international response to the Ebola fight in the three Mano River Union States of Sierra Leone, Guinea and Liberia, especially the latter, which had been declared Ebola free by WHO over two months ago.

In his congratulatory message to Sierra Leoneans, Ambassador M.S Kargbo referred to Ebola survivors as heroes and heroines of the Ebola fight and called on the public not to stigmatize them but to encourage them as fellow compatriots who deserve the same rights as those who were not infected by the deadly epidemic.

“Let us see them as heroes and heroines for surviving the deadly disease which they did not wish for or bought in the market,” he admonished Sierra Leoneans.

He praised their courage and Government’s tenacious support to them after their discharge from holding centers. He assured that the Government will continue supporting them persistently through the Ministry of Social Welfare, Gender and Children’s Affairs until they reintegrate into society.

Ambassador Kargbo in his message also commended development partners, donors and friendly countries for their response to the Ebola fight. He extended his profound gratitude and appreciation to all the countries that sent healthcare workers and donated resources to Sierra Leone to fight the Ebola virus, making special reference to the Government of the Kingdom of Saudi Arabia under the late King Abdullah bin Abdul Aziz Al Saud for the donation of millions of US Dollars to the Jeddah based Islamic Development Bank (IDB) to support Ebola fighting program, funding equipment and specialized treatment centers in the Ebola –affected countries.

Similarly, the Envoy commended the Organization of Islamic Cooperation (OIC) for mobilizing resources from member states for the eradication of the virus. The soft-spoken Ambassador also hailed the British Government which sent healthcare workers and built holding and treatment centers in various parts of the country, including Kerry Town Treatment Centre – the largest treatment center that was manned by British military health workers.

The Ambassador further showered praises on the People’s Republic of China for its timely response to the Ebola fight during the height of the outbreak when the President was persistently appealing to the international community for its immediate response which many people say, came in late. He also praised other countries and organizations that contributed immensely to the Ebola fight especially the African Union Contingent, Cuba, Italy and others.

“Our Government made tremendous efforts to end Ebola in the country, but it would not have been possible without assistance from the international community,” the Sierra Leone Envoy maintained.

He recognized the roles played by the National Ebola Response Centre (NERC) headed by Rtd. Major Paolo Conteh in helping the President to end the Ebola fight as well as the World Health Organization and other medical organizations that contributed greatly to ending the Ebola fight by putting health regulations in place to prevent people from being infected by the deadly virus.

The Envoy also commended the role played by the Army, Police, Civil Society, Women and Youth Groups, Lawyers, the Media – print and electronics, especially the State Broadcaster, SLBC, which is widely viewed here in Saudi. He also poured praises on traditional and religious leaders who championed the Ebola fight in their respective communities by ensuring that their subjects and followers strictly adhere to the health regulations and bye-laws meant to prevent people from having infected by Ebola.

Ambassador Kargbo appreciated the fervent weekly prayers offered by the Sierra Leone Nationals’ Union (SLNU) in the Kingdom of Saudi Arabia in collaboration with the “Daa’wa” and Guidance Committee at the Chancery in Riyadh – all aimed at the eradication of Ebola. He therefore, congratulated all Sierra Leoneans in the Kingdom for a job well done.

When hailing the resilience of President Dr. Ernest Bai Koroma to take on the Ebola fight desperately, he praised his patriotism and courage to avert resources meant for development programmes towards the Ebola fight after he had committed himself to eradicating the deadly epidemic from the country to end the suffering of his people.

The Ambassador spoke about the robust steps that were taken by the President to ensure that Ebola was kicked out of the country, such as the disciplinary measures that dealt with traditional leaders who flouted the bye-laws to prevent the infection of the Ebola Virus, the compelling of religious and traditional leaders to involve in the Ebola fight, the setting up of the National Ebola Response Centre (NERC) to lead the Ebola fight, his frequent appeals for international response to the Ebola fight, his social mobilization tours of the country to appeal to fellow Sierra Leoneans to strictly obey the health regulations and bye-laws to overcome the scourge and many other resilient steps by the President have today paid off.

“The effective leadership role His Excellency the President Dr. Ernest Bai Koroma played in ensuring that we put Ebola behind us has demonstrated his love for his country and people,” the Ambassador said in his message to Sierra Leoneans. He added that: “The President has proved to Sierra Leoneans and the International Community that he will always stand by his people during difficult times. Our President is compassionate and that is one of the virtues we saw in him for electing him as our National Leader and Chairman in the ruling All Peoples Congress (APC) Party.”

He maintained that if the Government of President Dr. Ernest Bai Koroma was not transparent and accountable to the people, the President would not have authorized the auditing of the Ebola funds which were raised through Government’s effort, donations made by institutions and individuals, and international response.

He entreated Sierra Leoneans to strongly believe in the charismatic leadership of President Dr. Ernest Bai Koroma, who, he said, will never let his country and people down until he leaves office with unprecedented legacies Sierra Leoneans will remember for decades to come. The Envoy maintained that the President successfully did a three-year turnaround and implemented his Agenda for Change which convinced Sierra Leoneans to endorse him for a second term during the November 2012 Presidential election which he scored 58%.

He however lamented that the Government was in the process of implementing the Agenda for Prosperity meant to consolidate the gains already made under the Agenda for Change when Ebola struck last year in May from neighboring Guinea and had a devastating effect on the economy which, prior to the outbreak, was among the fastest growing economies. He was very hopeful that now that Sierra Leone has been declared Ebola-free, the Government of His Excellency the President Dr. Ernest Bai Koroma will speedily embark on the Post-Ebola Socio-Economic Recovery Plan aimed at putting back the Agenda for Prosperity on track.

With the end of Ebola, the Ambassador said, he is certain that with support from development partners and friends of Sierra Leone, the President will kick-start his remarkable development strides and the country will be up and running once again.

“If you look at the devastating effect of the Ebola outbreak to our economy, we need urgent support from development partners and our friends to get our development projects back on track and make the lives of our people comfortable,” the Ambassador said in his message.

Ambassador Kargbo also sympathized with all the families of doctors and health workers who lost their lives fighting to contain the deadly virus. He appealed to the families and relatives to take heart as their loved ones died trying to save lives. “Sierra Leoneans will never forget these doctors and frontline health workers who sacrificed their lives to save humanity when the deadly virus was new to the country,” Ambassador Kargbo reiterated.

He also sympathized with Sierra Leoneans who lost their loved ones to the deadly epidemic across the country. Over three thousand five hundred (3,500) Sierra Leoneans were recorded to have died of the Ebola Virus whilst nearly ten thousand (10,000) people were affected by the virus. But according to the Ambassador, Sierra Leoneans have gained so much experience in the Ebola fight, but he also hastens to say that: “Let us hope as a nation that the deadly virus does not recur in our country because it will affect development again.”

Envoy Kargbo once more praised the robustness and resilience of Sierra Leoneans who obeyed the health regulations and bye-laws of the Ebola fight noting that if Sierra Leone was a lawless country, its citizens would have defied all these health regulations and bye-laws thereby prolonging the spread of the deadly virus. “Sierra Leoneans deserve praise for their understanding and cooperation with the Government for the day we are celebrating today,” the Ambassador maintained, noting, “We have shown to the world that, we as a nation became one family during trying times and we have demonstrated this on several occasions.”

Concluding his message, Ambassador Kargbo appealed to all Sierra Leoneans to cooperate with the Government of President Dr. Ernest Bai Koroma in the implementation of the Ebola Socio-Economic Recovery plan which aims at taking the national economy back on track for the prosperity of the country. The Ambassador appealed to Sierra Leoneans in the Diaspora to also contribute to the Post-Ebola Recovery programme in their own little way for the speedy recovery of our economy so that more development projects would be implemented in the country before President Dr. Ernest Bai Koroma leaves office.