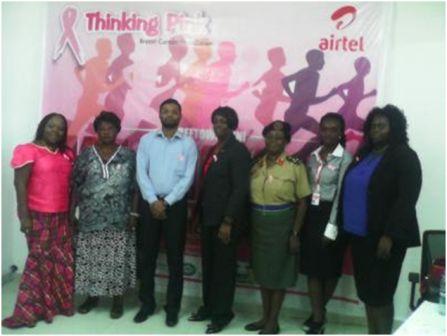 Leading GSM operator in the country, Airtel has supported the Thinking Pink Breast Foundation to organize the Freetown Mini Marathon 2015.

She noted that cancer, a non communicable disease is a silent killer, adding that she is glad that Airtel has come onboard to support this year’s marathon.

She disclosed that this year’s marathon has been slated for 31st October 2015 from Cotton Tree to Family Kingdom along Lumley Beach.

The CEO maintained that the event is geared towards raising fund, awareness raising and to promote physical fitness, adding last year around this time all what was being talked about was Ebola, but thanked that companies like Airtel has find time to think about breast cancer.

She said women affected by breast cancer continue to die because they ignore the signs and symptoms, and therefore urged always seek medical attention whenever they noticed lumps on their breast.

She disclosed that T-shirts for the marathon are out for sale at their Precival Street and Airtel shop on Rawdon Street for Le 40,000 and urged members of the public to partake at the event to raise the awareness.

Deputy Minister of Health, Madina Rahman, said the event is not a happy one for her because she knows too much about breast cancer, adding that breast cancer also affects men.

She spoke about the need for early detection and urged especially women to be doing a monthly self breast examination to know their status.

The deputy minister also threw light on some of the causes of cancer including overweight, lack of exercise, the use of contractive by girls and family cancer history.   She also spoke about it signs including inverted nipples, discharge from breast are among the worrying signs of the disease.

Madam Rahaman noted that even though the facilities to diagnose cancer are not available in the country, the government is striving very hard to make them available, because according to her early detection leads to 90% survival and late detection 15% chance of survival.

Brig. Kastoria Kabia, in her remarks, noted that breast cancer can affect every women at anytime, saying that if not detected early it can kill.

She furthered she has also heard that men too suffer from breast cancer and thanked Thinking Pink Breast Cancer Foundation and Airtel for the planned awareness raising campaign. She also urged them not to make the event a one off, but continue with the sensitization throughout the year, teach women how to do self breast check and how to prevent.

Acting Managing Director of Airtel, Sarjeet Kumar, also noted that cancer is a silent killer because lots of people do not know about it,

He said because women are the strongest pillar in society that is why Airtel is always supportive of anything that has to do with them.

He furthered that now that the Ebola is almost behind us, it shows that the country has the ability other emerging diseases like cancer and urged the media to spread the awareness about breast.

Head of Corporate Affairs, Airtel, June Rose Johnson, disclosed that the theme for this marathon is: “An Emerging World without Cancer,” adding on the day for the marathon there would be free breast screening at the Family Kingdom.

A cancer Survivor, Ejatu Tejan with cell phone number, 076-883223, appealed for financial help to continue her treatment, because according to her she has survived but has not yet won the fight.