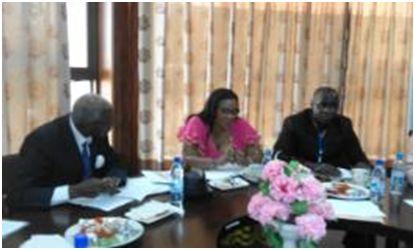 Presenting their party position papers to the National Electoral Commission (NEC) through the Political Parties Registration Commission (PPRC), the eight political parties accepted the postponement but seven suggested that the councils be dissolved at the end of their term of office and management committees formed.  The APC Secretary General Ambassador Alhaji Foday Yansaneh however suggested that the councils be maintained until the elections are held in 2018.

The parties also raised concerns about the high nomination fees and that NEC should do the voter registration rather than relying on the National Registration Secretariat (NRS) for data.

In his presentation, the Chairman and Leader of the Alliance Democratic Party (ADP), Mohamed Kamaraimba Mansaray informed the meeting that the ADP is not in support of the postponement and maintained that the Commission must work in accordance with the law which states that local councils should be in office for four years and elections held after the four years.

Meanwhile, the Sierra Leone Peoples Party (SLPP) and the Peoples Movement for Democratic Change (PMDC) were not at the meeting but the PMDC like the ADP in their position paper stated that the party is against the postponement of the Local Council Elections.

In her response, a Commissioner of NEC Madam Miatta French says NEC proposed the postponement of the Local Council Elections due to the current circumstances but they would have loved to hold the elections separately if things were normal. On the issue of the councils being dissolved she advised that the political parties discuss the details with the relevant authorities.