President Koroma Delivered A Well-Structured , Compact, Engaging And Effective Speech At The UN 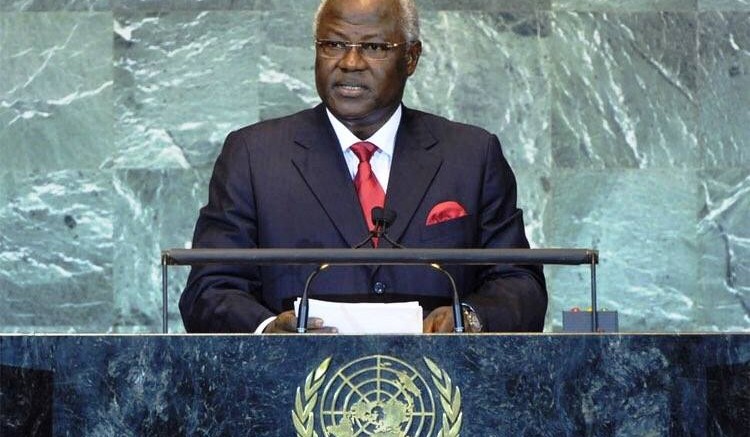 President Koroma Delivered A Well-Structured , Compact, Engaging And Effective Speech At The UN

How can people who are so screwed up  in their thinking, logic and appreciation of President Ernest Koroma’s achievements credit him with anything good ? Even if President Koroma was to leave power with the streets of Freetown paved with gold , those who have constituted themselves as not only the President’s detractors but clowns who cry down anything good about their country would never see the beneficial aspects of the achievement.  (Photo: HE President Ernest Bai Koroma)

Only an imbecile who does not try to understand things before he comments about them would  describe President Koroma’s speech to the recent UN General Assembly as poor . UNGA statements are not delivered at the whims of heads of state. Ignorant people do not know that statements delivered at the UNGA  follow a given protocol and pattern. Chronologically, they must first start with a commendation of the work of the current President of the General Assembly. His appointment is acknowledged and he is assured of the confidence and support of the speaking head of state. The outgoing President is also commended for his service to the GA.  This courtesy and protocol was followed by President Koroma.

Next, the work of the Secretary General of the UN is acknowledged and commended . Some heads of state or representatives of government like the late Hugo Chavez and Muamer Ghaddaffi who wanted to criticize the United Nations did try to limit their commendation of the two personalities but they would, most times, still follow the script by at least acknowledging the two personalities. It is the protocol .

The speaking head of state or representative of government would then find a creative manner to introduce and comment on the theme of the year’s General Assembly and his/her country’s place in it. Therefore, it is very foolish and unlearned and also a manifestation of ignorance of UNGA protocols for somebody to contend that President Koroma  “failed to start his speech with the Ebola crisis that has killed thousands in Sierra Leone. And he went through several paragraphs before mentioning Ebola – albeit vaguely.”

President Koroma would not have skipped the chronological order . It is not the way UNGA speeches are structured and delivered and any speaker who deviates from the script is just trying to do his own thing. Of course, there are no sanctions for not following the protocol. But President Koroma, being the orderly person he is, had to follow the set procedure . He cares for Ebola and thousands of lives that had been lost and has proved this sufficiently in bilateral and side-meetings as well as on the podium of the very General Assembly where he had poured out his concerns and strongly appealed for more international support . He has demonstrated it back home by harnessing, mobilizing , accruing and distributing local and international support and resources , which is why we are now involved in the countdown to a declaration of the end of the outbreak in Sierra Leone.

After laying the foundation  for his statement by adhering to the chronology of the typical UNGA statement , President then effectively and authoritatively started handling one by one  the thematic concerns of this year’s UNGA, with every main point  supporting attention-grabbing  sub-points—The New Direction, Sustainable Development Goals ( SDGs ) and allied issues, like climate change , the refugee crises,  fight against poverty,  trans-national organized crime, terrorism, proliferation of small arms and light weapons, piracy, violence against women,  human rights,  expanding access to health and education,  security, safety, peace, education, health, development, which are very weighty matters in the overall agenda of the United Nations, year in, year out. In fact, in so doing President Koroma demonstrated a a keen sense and appreciation of the operations of the United Nations . So, what made his speech poor ?  IT WAS A THEMATIC EXCELLENCE ! ! !  President Koroma then dwelt on the unfinished business of  the Millennium Development Goals ( MDGs ) and Sierra Leone’s place in them in an efficiently informative manner.

As Chairman of the African Union Committee of 10 African states ( C-10) on UN Security Council Reform, a responsibility he has performed excellently and won plaudits from his peers and other world leaders, President Koroma continued his strong advocacy for Africa to be granted ” two Permanent seats and two additional Non-permanent seats as articulated in the Ezulwini Consensus and Sirte Declaration”. President Koroma , in so doing, enhanced his impressive stature as an international statesman.

Throughout his delivery, President Koroma was engaging and he kept an attentive audience .

Then the most remarkable aspect of the statement was exhibited when the President left the best for the last. Everybody knows that Ebola is the most urgent crisis facing Sierra Leone and therefore President Koroma demonstrated a brilliant sense of timing by treating Ebola last in his statement. Anybody who went to a good school and took part in that school’s Literary and Debating Society ( L & DS ) was definitely taught that the most effective manner to articulate your points in a debate is to deal with the two most important points first and last, to establish a good first impression and then to leave the audience with your most important point  to think about. It is different from writing an article where journalism schools teach that you place the most important facts first since many people do not read articles to the very end.

Therefore, it was a structural and thematic success for President Koroma to have left Ebola as the last but most important topic ( In our present circumstances ) in his statement. When he finished his statement, President Koroma left on the minds of the international body Sierra Leone’s distress with Ebola and his continued strong appeal for continuous support to our nation.

From all the points I have advanced, there is no doubt that President Koroma delivered a well-structured , compact, engaging and effective statement at the UN. After the speech, many leaders sent delegates and diplomatic representatives to line up and  congratulate President Koroma for a well-delivered statement because the speech struck a chord .

People are free to antagonize President Koroma as they wish, but they must stop trying to change the narrative to satisfy their ignorant , biased and partisan ends . We are not fools to be brainwashed and manipulated at will by rebels who cannot tell the trees from the forest.

Africa Faces the Challenge of Sust...

We are Not Competing. We want to c...