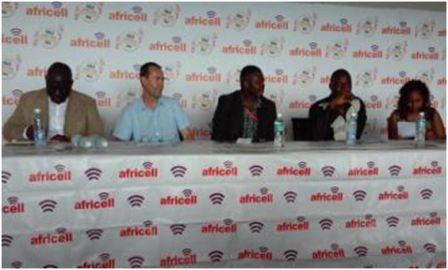 Africell mobile company in collaboration with Street Child will conduct the fourth Sierra Leone Marathon schedule for the 24th October 2015. Sierra Leone marathon for the past years have serve as the country’s leading sporting event hosted in Makeni. It a marathon organized by Street Child to raise funds in order to help vulnerable children across the country.

In his address, the Deputy CEO for Street Child UK Paul Humphries stated that this year’s marathon will draw runners from Britain, America, Australia, across mainland Europe and Sierra Leone, adding a total of 500 national and international runners will participate. Mr. Humphries said that the aim of this year’s marathon is not only to raise funds for vulnerable children but to also show that Sierra Leone is very much open for business once again. “With international runners from three separate continents, we hope that this year’s marathon will allay the fear created in the minds of people outside by the Ebola virus” he said. Funds from this year’s marathon he maintained will go towards supporting vulnerable children and families worst affected by the Ebola virus across the country. He further that their aim is to help create a more positive life for those that need it most.

Registration for interested participant is open until the 18th October for the various categories 26.2m, 13.1m, 10k and 5k each with its own price. Interested participant are encourage to get their forms at Street Child head office at Pademba road and city pharmacy Wilberforce Street or in Makeni Clubhouse on Marburaka Road. Mr. Humphries noted that all runners will receive medals and t-shirt, while winners of each race will take home one of the official Street Child Sierra Leone marathon trophies.

Speaking on behalf of Africell, Chief Corporate Affairs Officer Joe Abass Bangura mentioned that Africell is delighted to be the official Telecoms provider and a partner of the fourth edition of Sierra Leone Marathon 2015, adding they have done it for the previous edition. He continued that Africell fully support the two key objectives of this year’s marathon which is to rebrand the country’s image, noting Sierra Leone is safe, and also to raise funds to help rescue vulnerable Street Children giving them home and education. Mr. Bangura maintained that the marathon will send massage to the world and also demonstrate that even though WHO is yet to declare Sierra Leone Ebola free, the country is a safe place to do business.

Africell he said is well known for its support to the grassroots and needy Sierra Leoneans adding they are elated at the chance to once again make a difference in the lives of vulnerable children. He continued that Africell is a dominant supporter of sport in the country as they have been supporting various sporting disciplines including Football, Volleyball Lawn Tennis and more.

Africell support in this year’s marathon will cover the following areas; printing of banners and posters for publicity, media coverage, P. A system platform stage and a cheque of ten million Leones.

Bank of Sierra Leone embraces the...

When Madina’s Services Get Interna...