Canabis Sativa is a threat to food security says TOCU 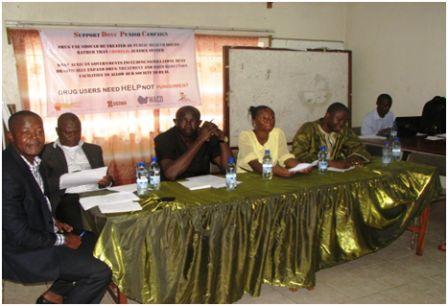 Canabis Sativa is a threat to food security says TOCU

Detective Superintendent Ishmael Samura of Trans Organized Crime Unit (TOCU), in his statement marking the official launching of the first ever National Drug Policy Network of Sierra Leone (NDPN-SL), said it is now an open secret that Cannabis Sativa is now widely cultivated in all the four corners of Sierra Leone so much so that it has now become a serious threat to national food security drive. (Photo: Members of the High Table at the launching ceremony)

Detective Superintendent Ishmael Samura made this disclosure at the CHASL Hall, 4b Kingharman Road in Freetown on Tuesday 22nd September this year.

He continued that at the end of the civil conflict in 2002, drug and its abuse posed a serious threat to the National Security of Sierra Leone as there was a dramatic increase in the incidences of violent crimes especially armed robbery which he said was largely attributed to the high prevalence of drugs abuse among the youth population in this country.

He recalled 13 July, 2008, when a plane loaded with 703 Kilograms of pure Cocaine unlawfully landed at the Lungi International Airport, noting that the country had no meaningful legislation in place except that of the Pharmacy and Drug Act of 2001 which, he stated, could not adequately address the issue. As a consequence, he went on, the National Drugs Control Act was hurriedly enacted in order to mitigate the situation and tackle the issues that the Pharmacy and Drug Act of 2001 could not address at that time.

Ishmael Samura furthered that another concern of Trans Organized Crime Unit (TOCU) is that of supply and demand reduction as they are strictly focused on supply reduction strategies including destruction of Cannabis farms, intelligence gathering, arrests, seizures and prosecution.

He said TOCU is looking at the Drug Act closely with the aim of proposing to government that the issue of supply reduction be handled by the Drug Law Enforcement Agency (NDLEA) in collaboration with key Ministries, Departments and Agencies as the fight against drug trafficking via demand reduction or supply reduction requires money.

Representative of the Open Society Initiative for West Africa (OSIWA), Joe Hindovei Pemagbi, noted that West Africa is increasingly becoming a hub in the global drug trade particularly through the shipment of narcotics from Latin America through West Africa to Europe. He continued that OSIWA recognizes that this development poses a serious threat to good governance, peace and stability, economic growth and public health in West Africa as the continent is experiencing new and emerging problems associated with drug trade, noting that the region can learn from the successes and mistakes elsewhere in order to respond in the most effective way .

Pemagbi urged Civil Society Organizations to play a central role by working alongside the West Africa Commission on Drugs to increase political awareness of the issues, promote and deliver effective responses and work as a watchdog to challenge and monitor ineffective policy responses.

My nightmare on the Blama-Boadjibu...